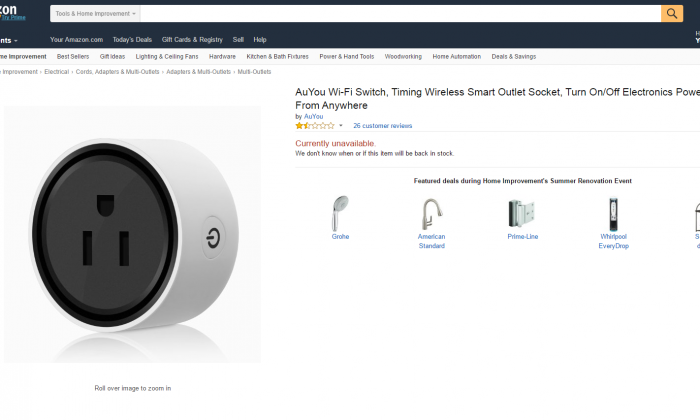 AuYou Wifi switch, a product China that allows users to control power supply with their smart phones, which was found to have serious security flaw. (Amazon.com)
China

“Nice hardware, infuriating setup issues, terrible insecure software,” wrote Matthew Garrett, an American security developer, in his review of a network product on Amazon. His 800 word note set off a bizarre series of exchanges with the Chinese firm who produced the product, and was filtered back to Chinese internet users, who recounted their own horror stories with companies in China that have even thinner skin.

Garrett, a security engineer at CoreOS, a Linux operating system, often provides free security reviews of the technological products he buys online. His June 22 review of the AuYou Wi-Fi Switch received 2,119 “likes” within a few weeks — and also attracted the attention of the company.

Employees of AuYou began sending emails imploring him to delete the negative review, and threatening to lodge a complaint with Amazon.

“Just now my boss has blamed me, and he said if I do not remove this bad review, he will quit me. Please help me,” the AuYou staff wrote in one of the emails, according to TechCrunch. “Could you please change your bad review into good?” she continued.

The AuYou WiFi Switch costs $30, plugs into a wall outlet, and allows users to remotely control electricity at home, through their smartphones.

But when Garrett looked into how it actually works, he found that its communications to the server back in China aren’t secure.  “If anybody knows the MAC address of one of your sockets, they can control it from anywhere in the world,” he wrote.

The product was pulled from Amazon within about a week.

“If I thought there was a realistic chance that people were going to lose their jobs over something I was writing, that’s something that would make me reconsider,” Garrett told TechCrunch.

But, he added, “the attitude that many companies have of not giving any indication of caring about the security of the people they’re selling to is horrifying in its own way.”

The harassment he experienced was par for the course in China, though. Chinese sellers often demand users take down negative ratings, making relentless phone calls, sending emails, and harassing or threatening users.

When Garrett’s story was translated into Chinese and shared online in China, online shoppers there began to pour out their own bitter experience, saying how lucky he was that international calls are too expensive.

“I got harassed for nearly a month after I wrote a medium rating,” one internet user wrote after the post on Weibo. “When I no longer took their calls, they called back using another number.”

“Four emails is pretty light,” another wrote. “Late at night, I got all kinds of harassing calls, one after another. My mom even asked why I wasn’t picking up my phone!”