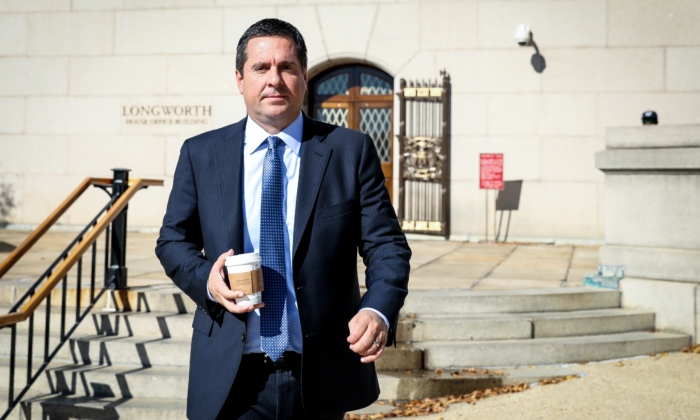 The leaks of the details of the calls between President Donald Trump and the leaders of Mexico and Australia in 2017 were the products of intelligence gathering, House Intelligence Committee Ranking Member Devin Nunes (R-Calif.) told The Epoch Times in an exclusive interview.

Nunes said that sources confirmed to the House Intelligence Committee that the leaks of the calls between Trump and foreign leaders were based on intelligence products, prompting Nunes to investigate the matter.

“We knew right away in January that unmasking was occurring. Well, we knew the big one, the major one, was the Flynn transcript that was given out. And then you slowly had the Australian prime minister; you had the Mexican president, plus stories that we were seeing out in the mainstream news media. It was clear that somehow people were getting information from what appeared to be intelligence products,” Nunes said on Oct. 28.

“We had some sources that had come to us to tell us that this was happening. So finally, we were able to finally piece it together, and I was able to review it. And then once I saw what it was and it was much more than what I expected. And it had nothing to do with Russia.”

Nunes had previously revealed, in March 2017, that he had confirmed that the intelligence community incidentally collected the communications of Trump’s transition team and unmasked the names of individual officials. His comments to The Epoch Times on Oct. 28 show that intelligence gathering on Trump and his associates continued beyond the Inauguration Day and resulted in major leaks to the media.

“And then the media had no interest in that. Not only were they never interested in the unmaskings that occurred, they continue to be against it. They said that I did all kinds of things wrong, and they only wanted to know where I got it from. And then they made up a total phony story about how somehow I was going over to the White House at midnight, which was complete completely nuts,” Nunes said, referring to the disproven allegations that he was coordinating his investigation with the White House.

The Trump administration was subjected to a barrage of leaks from the president’s first day in office. A Senate investigation determined that during Trump’s first 126 days in office, leaks flowed at a rate of one per day. Many of the leaks contained information meant to damage or ridicule Trump or his associates. Roughly half of the leaks went to The New York Times and The Washington Post.

The revelation that the intelligence community was spying on a sitting president is the latest development in the scandal surrounding the spying on Trump’s campaign. The claim by Nunes aligns with reports that U.S. Attorney John Durham—who is investigating the spying scandal—has extended the timeline of his criminal investigation to include the early months of Trump’s presidency. Fox News reported earlier this month that the timeframe of Durham’s inquiry now extends up until the spring of 2017.

It is not known whether Durham is looking into the unmaskings of the president. Attorney General William Barr assigned Durham to investigate the origins of the FBI’s counterintelligence investigation of the Trump campaign. Barr told Congress that he believes spying occurred on the Trump campaign and that he is looking to determine whether the surveillance was legal and free of improper motivation.

In a wide-ranging interview in his office in Washington, Nunes also confirmed that the FBI investigators failed to brief the Congressional Gang of Eight about their probe of the Trump campaign. Also, Nunes disclosed that the FBI’s investigation of the Trump campaign started earlier than late July, the time listed in the final report by special counsel Robert Mueller.