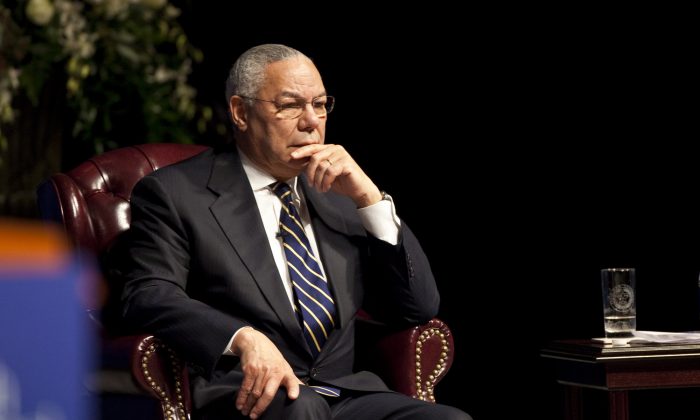 Leaked emails from former Secretary of State Colin Powell show him warning a Hillary Clinton staffer not to link him to the controversy about Clinton’s use of a private email server.

Hacked emails released by a group that calls itself “DC Leaks” show Powell messaging Clinton’s former aide Cheryl Mills over an article published by Breitbart. The article, headlined “Saving Hillary By Inventing An ‘Email Problem’ For Scott Walker,” talks in part about Powell.

The story, written on March 5, 2015, was over Clinton’s use of a private email server and how the media tried to find Republicans to blame over the matter. It also said that news outlets and Clinton tried to portray an “‘Everybody Does It’ incantation” about email controversies by including Gov. Scott Walker (R-WI) and Powell.

Epoch Times could not independently verify the authenticity of the emails. A spokesperson for Colin Powell confirmed to CBS News that his Gmail account had been hacked.

In an email dated March 7, 2015, Powell wrote to Mills and included the link to the story he was mentioned in.

“You really don’t want to get me into this,” Powell said in the email. “I haven’t been asked nor said a word about HRC and won’t unless you all start it.”

Mills then replied, “agree and that message has been clearly shared, so she will not nor will anyone she controls.”

“I can’t address folks who are beyond that, so please ping or call me when you see anything that worries you,” she added.

In another email on March 9, 2015, Powell told Beth Jones, that he had “Been having fun with emailgate.”

“Hillary’s Mafia keeps trying to suck me into it,” he wrote.

Jones then replied, “Good grief. She must have used her classified account. Why doesn’t her crowd  head for that aspect of the story?”

“Because she didn’t; all on her private domain with a server in her house in NYC,” replied Powell.

She then asked if it was “fatal” for Clinton.

“Not unless she keeps digggin [sic] deeper. She is giving an interview on it all later this week. I pub out a statement as soon as NYT broked [sic] the story last week,” said Powell.

Dealing with the Press

A day later, his spokeswoman, Peggy Cifrino, emailed Powell about an ABC reporter asking her about Powell’s use of emails.

“The one thing he tried to pin me down on was how much, or did you actually use your state.gov account at all,” said Cifrino. “I just reiterated that you had a state computer and email account, it was over 10 years ago and I didn’t remember how much you may have used it.”

That same day, Powell received an email from Emily Miller, a journalist, who previously worked with him at the State Department.

“I really don’t want to personally get sucked into this,” said Miller.

“So I’m just going to say I worked for you and Rice ten years ago. She didn’t use unclassified email as far as I know. Based on your statement, you used your personal account because it was a new thing. There was no policy against personal email accounts for work. We all used them for non secure business. The other secure email account was used for secret material. Okay ?” she asked Powell.

He then asked for her phone number.

The release of his hacked emails comes after House Democrats last week released an exchange between Clinton and Powell in which he advised her on the use of a personal email account.

On Jan. 23, 2009, Clinton reached out to Powell over the use of a BlackBerry while she served in office. Powell warned Clinton that if it became “public” that she had a BlackBerry and used it to “do business”, her emails could become “official records and subject to the law.”

“Be very careful. I got around it all by not saying much and not using systems that captured data,” said Powell in the email.