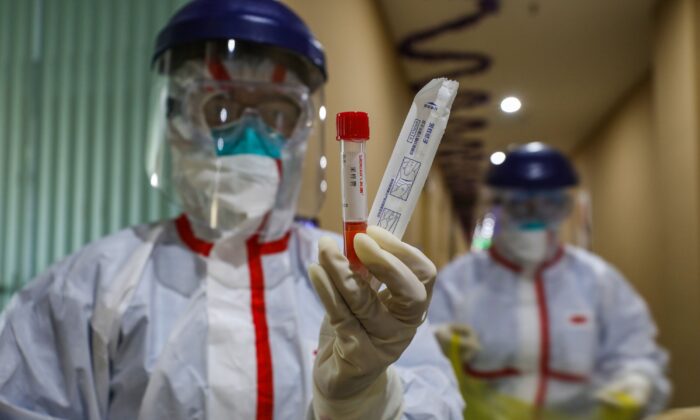 A medical staff member showing a test tube after taking samples from a person to be tested for the new coronavirus at a quarantine zone in Wuhan City, Hubei Province, China on Feb. 4, 2020. (STR/AFP via Getty Images)
By Angela Bright

A leaked photo shared on Chinese social media has revealed that hundreds of medical workers in the coronavirus epicenter of Wuhan City have been infected with the virus.

Hou Anyang, founder and chairman of a Chinese asset management firm, first posted on Weibo, a Twitter-like social media platform, a photo from a recent coronavirus prevention and control conference in Hubei Province. Wuhan is the capital of Hubei. Hou’s Weibo account is no longer viewable.

The photo revealed a presentation slide from the conference, where it lists the Wuhan facilities where there are 15 or more confirmed cases of coronavirus infection among medical staff, along with the dates of the first confirmed infection.

The facility with the most infections was the Wuhan Union Hospital. It has 101 confirmed cases and 161 suspected cases, totaling 262. The first infection occurred on January 11.

In third place was the No.1 Hospital of Wuhan, with 52 confirmed cases and 73 suspected cases, totaling 125. The first infection occurred on Dec. 27.

All three facilities are among the 14 hospitals designated by Wuhan authorities to treat virus patients.

Almost all on the presentation slide were hospitals in Wuhan, except two in neighboring cities: the People’s Hospital of Hanchuan City and the Central Hospital of E Zhou City.

The data reveals that authorities already knew coronavirus patients could transmit the virus to hospital staff—but they lied to the public, only acknowledging that the pathogen was capable of human-to-human transmission on Jan. 20.

On Jan. 11, the Wuhan Health Commission had reiterated that there was no clear evidence of “human-to-human transmission” and insisted that no medical staff had been infected.

Days later on Jan. 20, the country’s leading respiratory expert Zhong Nanshan announced that the illness was contagious, and that in one case, a patient had infected 14 medical workers.

That infection occurred within the brain neurosurgery department of the Wuhan Union Hospital. The patient, Zhao Junshi, underwent surgery there to remove a pituitary tumor. Medical staff only later discovered that he contracted the coronavirus.

Chinese media Caixin also revealed that a large number of medical staff were infected at the Wuhan No. 7 Hospital.

The media outlet interviewed Peng Zhiyong, director of the critical care department at the Wuhan University Zhongnan Hospital. Peng’s workplace is designated as a counterpart hospital to Wuhan No.7 Hospital, in order to provide mutual assistance. He went to support the intensive care unit at the latter hospital and found that two-thirds of the medical staff there were infected. The doctors had little protection due to a lack of protective supplies and medical gear.

Smaller-scale community hospitals have also revealed that medical workers have been infected.

The Epoch Times interviewed an outpatient doctor at a community hospital in Wuhan, Mr. Wei. He said many doctors at his workplace have been infected, including himself. Because authorities did not give prompt information about the disease, the staff came into contact with a large number of people, he said.