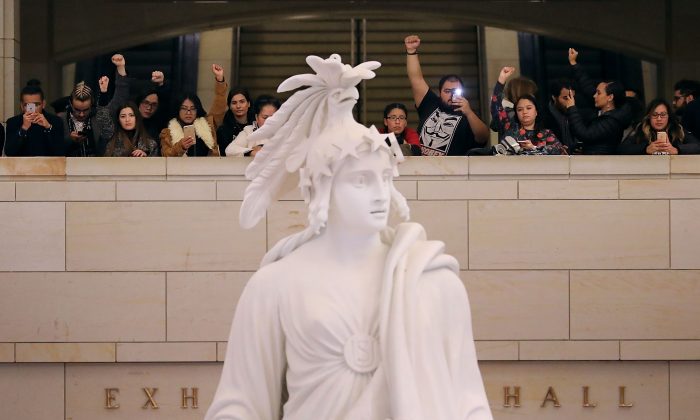 Demonstrators from The Seed Project stage a protest in the U.S. Capitol Visitors Center to demand immigration reform and a renewal of the Deferred Action for Childhood Arrivals (DACA) program December 7, 2017 in Washington, DC. (Chip Somodevilla/Getty Images)
Politics

The memo, co-authored by former Clinton communications director Jennifer Palmieri, was sent around to allies calling on Democrats to “refuse to offer any votes for Republican spending bills that do not offer a fix for Dreamers and instead appropriate funds to deport them.”

Trump called on Congress to find a legislative fix for young immigrants, or “Dreamers,” facing deportation. House lawmakers recently put forward a bipartisan DACA compromise bill that also claims to address worries over chain migration. However, it’s unclear if the bill will pass.

CAP Action’s memo says protecting DACA is not only a “moral imperative” for Democrats, it also key to getting votes.

“The fight to protect Dreamers is not only a moral imperative, it is also a critical component of the Democratic Party’s future electoral success,” reads Palmieri’s memo, obtained by The Daily Caller News Foundation.

“If Democrats don’t try to do everything in their power to defend Dreamers, that will jeopardize Democrats’ electoral chances in 2018 and beyond,” reads the memo. “In short, the next few weeks will tell us a lot about the Democratic Party and its long-term electoral prospects.”