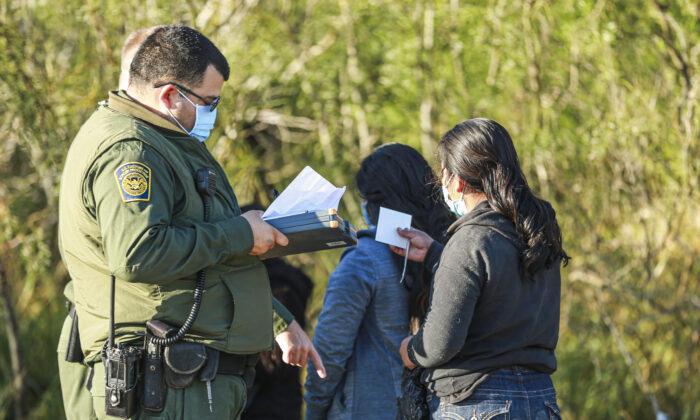 A leaked U.S. Department of Homeland Security (DHS) plan published this week shows senior officials being told that the removal of Title 42 would lead to an increase in illegal immigration and one way to respond to the increase is to release many apprehended illegal aliens into the U.S. interior.

The plan was being put in place to comply with an earlier executive order from President Joe Biden that directed officials to create a framework to address the causes of migration and to manage migration in addition to providing “safe and orderly processing” of illegal immigrants claiming asylum once they cross into the United States.

The plan “anticipates the eventual recession of Title 42 public health order,” an action that “will likely cause a surge in irregular immigration and have a direct impact to short-term holding and processing capacity along the” U.S.–Mexico border, the document states. That will stem in part from “the perception that restrictions to entry will be reduced.”

Top Biden administration officials on April 1 announced the decision to rescind the order, which has allowed for the quick expulsion of illegal immigrants since March 2020 due to concerns the aliens carry the virus that causes COVID-19.

As many as 450,000 illegal aliens could arrive along what the DHS calls the southwest border security and irregular migration zones of operation, which stretches from the southern U.S. border through Central America, in a 30-day period, according to one of the planning scenarios in the contingency plan.  That could lead to “multiple surges” of 10,000 to 20,000 immigrants hitting different locations at the same time.

DHS, which already dealt with a record-level of illegal immigration during Biden’s first year in office, says ways to remove illegal immigrants “will be limited” apart from pandemic-era powers.

That will lead to using “broadscale release mechanisms” like issuing notices to appear in court, or even releasing illegal immigrants without a court notice, a practice that was not used before Biden took office.

Nearly 95,000 illegal immigrants were released in 2021 without a court notice. Officials later mailed charging documents to them. Homeland Security Secretary Alejandro Mayorkas told members of Congress in November 2021 that the practice had been discontinued.

A DHS spokesman did not dispute the authenticity of the document.

Asked for comment, the spokesman in an email referred The Epoch Times to a portion of Mayorkas’s statement when the Title 42 decision was announced.

“Once the Title 42 Order is no longer in place, DHS will process individuals encountered at the border pursuant to Title 8, which is the standard procedure we use to place individuals in removal proceedings. Nonetheless, we know that smugglers will spread misinformation to take advantage of vulnerable migrants. Let me be clear: those unable to establish a legal basis to remain in the United States will be removed,” Mayorkas said at the time.

Rep. Andy Biggs (R-Ariz.), who represents a portion of a border state, told The Epoch Times in an email after reviewing the report that Biden and Mayorkas “have eviscerated our nation’s border security and immigration enforcement apparatus through various illegitimate executive orders and memorandums.

“Their decisions over the past year have created an unprecedented border crisis that has led to more than 2.5 million people crashing our southern border—an all-time high. And now it appears that their plan to address a new self-created border surge is to simply release everyone into the interior of the United States by lifting the Title 42 public health order,” Biggs said. “The Department of Homeland Security must either enroll all illegal aliens in the Migrant Protection Protocols program or detain them as required by law. Simply releasing them is unacceptable and illegal.”