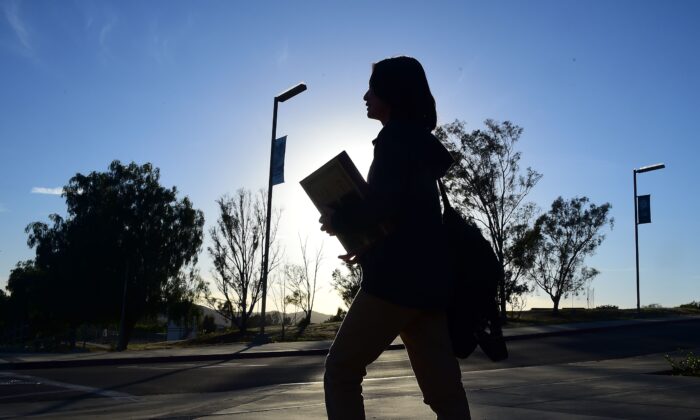 In this file photo, a student walks on the campus of a California school on March 23, 2016. (Frederic J. Brown/AFP via Getty Images)
By Brad Jones

In the audio clip, one teacher advised other teachers who lead LGBT clubs to maintain an air of plausible deniability so they can play dumb if they are questioned by parents.

“Because we are not official, we have no club rosters. We keep no records,” said the teacher, who is also an LGBT club leader. “In fact, sometimes we don’t really want to keep records because if parents get upset that their kids are coming? We’re like, ‘Yeah, I don’t know. Maybe they came?’ You know, we would never want a kid to get in trouble for attending if their parents are upset.”

The other teacher backed up the first teacher, suggesting activist teachers disguise the nature of GSA clubs by calling them something less obvious. She provided an example of this deception, pointing out she avoided naming her LGBT club a GSA. Instead, she called it the “Equity Club” and later changed the name to the “You Be You” club.

The teachers bragged about spying on students’ online searches and activity as well as eavesdropping on their conversations to identify and recruit sixth-grade students into these LGBT clubs whose membership rolls are kept hidden from parents.

The teachers also discussed a yearly anti-bullying presentation they provide to students, and they said LGBT issues were not the only topics they discussed.

However, when the kids went home and talked to their parents about the presentation, the parents complained about the LGBT content. One of the teachers suggested a different strategy to avoid resistance from parents.