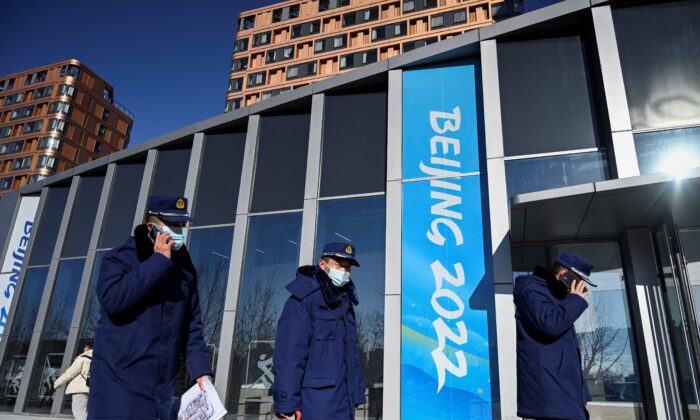 Inedible meals and dirty rooms were far from the end of the unsavory moments coming out of the Beijing Olympic bubble.

“Help!” wrote Finnish Olympic skier Katri Lylynpera on Instagram as water gushed through the ceiling and flooded the team’s living quarters after a pipe leakage.

A video she posted earlier in the week showed at least nine spots where water was streaming down: from ceiling light fixtures, sprinklers, and near a camera. The water accumulated into a pool covering the entire floor of the Finish quarters and was expanding outside the building’s glass door.

“Nice waterfall,” the athlete joked as she and other team members waited outside for village staff, donning hazmat suits, to stop the water flow.

The water leakage adds to a series of embarrassing spectacles for Beijing authorities, as the ruling communist party faces scrutiny over its human rights records and whether there has been biased officiating in favor of the Chinese players at the Games.

A week into the Beijing Games, complaints have been piling up from Olympians about poor meal conditions and nightmarish quarantine rules—including one athlete who was woken from bed at 3 a.m. to be sent into quarantine.

“I was crying like crazy because I didn’t know what was going on. I did not feel safe at all,” said Polish short-track speed skater Natalia Maliszewska, recalling the emotional strains as she sat alone at the back of the ambulance. “I cry until I have no more tears.”

Maliszewska, who was ruled in and out of the Games multiple times and pulled from training at the last minute, was not the only one who became tearful. A Russian biathlete said she turned pale and lost weight in the Olympic quarantine hotel after being forced to survive on meager fares of plain pasta and charred meat for days on end. A Belgian skeleton racer similarly made an emotional plea when she found herself being transferred to another isolation facility just as she thought she had been finally cleared of the virus.

At a press conference on Feb. 12, Beijing Olympic organizers were asked about the South Korean team’s choice to stay out of the Olympic village dining halls and instead set up its own meal service center.

Shen Qianfan, director of the Olympic Village Department of the Beijing Winter Olympics Organizing Committee, acknowledged they did not have a “full understanding of the complexity” in catering to the athletes’ dietary needs while insisting that local Chinese food had been wildly popular.

“There’s only a very small ratio of athletes who have specific taste and needs,” he said, adding that the athletes’ menu had been the product of two years of labor.

As if to counterbalance the criticisms, Chinese state media have been churning out stories about athletes giving endorsements of the Chinese food being served.

“Beijing Winter Games a banquet of delicacies for athletes,” read one headline published by the nationalist tabloid Global Times.

For many foreign athletes, airing their frustration on Western social media platforms has proved a quick way to give their conditions a boost. But such internet freedom would be a luxury elsewhere in China.

That stark contrast was highlighted in an exchange between an Instagram user with Eileen Gu, the U.S.-born skier who became China’s home crowd favorite for winning a gold medal for the country.

“Why can you use Instagram and millions of Chinese people from mainland cannot, why you got such special treatment as a Chinese citizen,” wrote user Cilla Chan to Gu, who had shied away from politically controversial topics during media appearances. “That’s not fair, can you speak up for those millions of Chinese who don’t have internet freedom[?]”

“Anyone can download a VPN,” Gu wrote in reply. She added that it’s “literally free on the App Store,” ending the sentence with a thumbs up emoji.

A screenshot of it circulating on Weibo, China’s Twitter, sparked heated debate.

“Literally I’m not the ‘anyone,’ and literally it’s illegal for me to scale the Great Firewall,” grunted a user, citing the unofficial name of the Chinese regime’s internet censorship system.