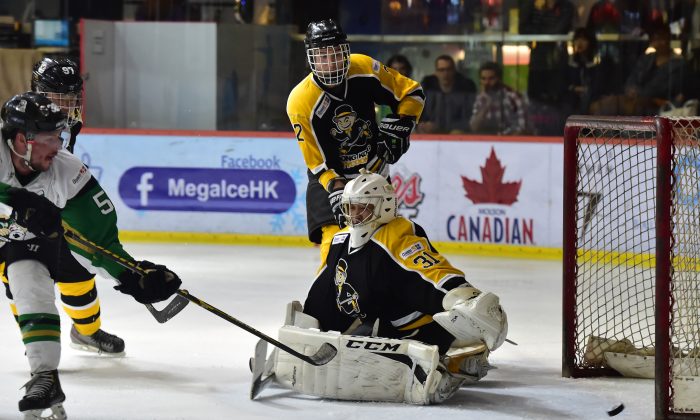 League Places at Stake in Last Round Matches

HONG KONG—Exciting games of hockey were on display in the CIHL at Mega Ice on Saturday Jan 31, 2015. An overtime 4-3 win for Macau Aces over the Hong Kong Tycoons and a ravaging of the Kowloon Warriors by South China Sharks 10-3 leaves the two top and bottom teams in the standings with important games to play next week (Feb 7) in the final round of the 2014-2015 regular season. With just 2-points between Aces and Sharks at the top and the same margin between Tycoons and Warriors at the bottom, sets up two final-week deciders for league positions.

Aces vs Tycoons
It was difficult to separate the league leaders Macau Aces form 3rd placed Hong Kong Tycoons in the match on Saturday Jan 31 both were playing with gusto producing fast, hard engrossing play which at times became quite intense when tempers flaring in players of both sides.

It was a tense opening session with good keeping at both ends and such well organized defences by the two sides that it was difficult for attackers to get in a good shot. In a determined start to the second period, Sharks’ Bentley Tse scored straight from the opening face-off, but Brad Smith equalize the scores for Tycoons 1-minute later and then added a second to put Tycoons into a 2-1 lead at the ice cleaning break.

With an early goal by Brian Wong for Sharks in the 3rd stanza and another for Sharks ten minutes into the session by Keith Tsang the sharks were leading as the seconds ticked down for the end of the match. But Jonathan Szychta scored for the Tycoons right on the buzzer to force overtime.

However, overtime did not last long with Tsang getting the 4-3 match winner for aces mid way through the 3-minute OT period.

Warriors vs Sharks
Although Eric McKenna got the opening goal for Warriors and completed his hat-trick during the match it was an emphatic evening of play for the Sharks. Bernard Fung leveled the score mid way through period-1 and that is the way it stayed until the second session.

McKenna again put Warriors into the lead early in session-2 but goals by Jamie Stark (2) and Jordan So took Sharks to a 4-2 lead going into the final period. Warriors put great effort into trying to get back on level terms in the second half of period-2 and seemed to run out of steam in period-3 while Sharks ran away with the match with a 10-3 score line.

3-Star awards for Sharks’ Jamie Stark (3 goals and 4 assists), Jordan So (3-goals and 2-assists), and Warriors’ Eric McKenna (hat-trick) were well justified. Other Sharks players on the score sheet were Bernard Fung (2) and Julien Jorand (2).

Standings
Aces are leading with16-points, Sharks are second with 14 points, Tycoons are on 12 and Warriors have 11-points. With just one more round before the Semi-finals Sharks play Aces and Tycoons play Warriors.