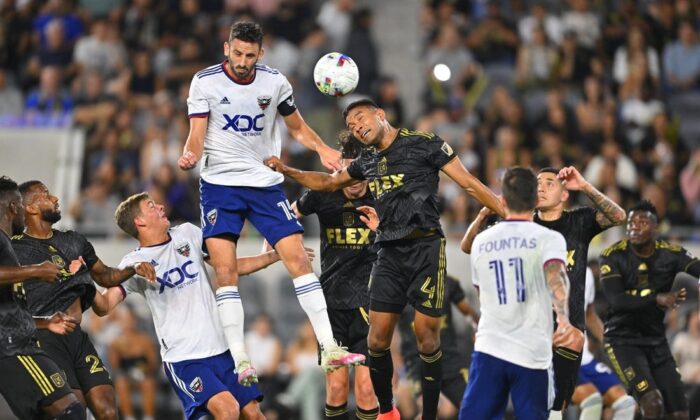 LAFC defender Eddie Segura (4) defends D.C. United defender Steve Birnbaum (15) on a pass from a free kick in the first half at Banc of California Stadium in Los Angeles, on Aug. 16, 2022. (Jayne Kamin-Oncea/USA TODAY Sports via Field Level Media)
Soccer

LOS ANGELES—D.C. United defender Steven Birnbaum’s dismissal for a second yellow card changed the complexion of the Tuesday match at Los Angeles FC, and the home team cashed in on the man advantage for a 1–0 win.

Los Angeles won for the seventh straight time at Banc of California Stadium.

LAFC are 8–0–1 against Eastern Conference teams and is a perfect 18–0–0 when scoring first in matches this season.

With big-name international signees Gareth Bale and Giorgio Chiellini watching from a suite, LAFC still got the job done once again. Both sat out for the second consecutive game.

D.C. United hung tough well into the second half against LAFC’s prolific attack. Playing a physical style and frustrating the hosts, D.C. had a chance at the upset.

However, when Birnbaum tripped Kellyn Acosta and drew a second yellow card for the foul, Los Angeles saw its big chance to take control and did so.

Opoku scored his sixth goal of the season, assisted by Cristian “Chicho” Arango.

D.C. United’s Taxiarchis Fountas almost leveled the score at 1 about two minutes after the LAFC goal, firing a shot off the post.

LAFC had more chances against 10-man D.C. United before the match ended, but goalkeeper D.C. David Ochoa made saves in the late minutes.

D.C. United have lost five straight away matches, getting outscored 14–0 in those games. They became just the fifth team in MLS history to take five straight shutout losses on the road, according to the league’s website.