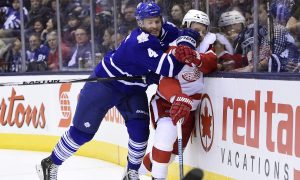 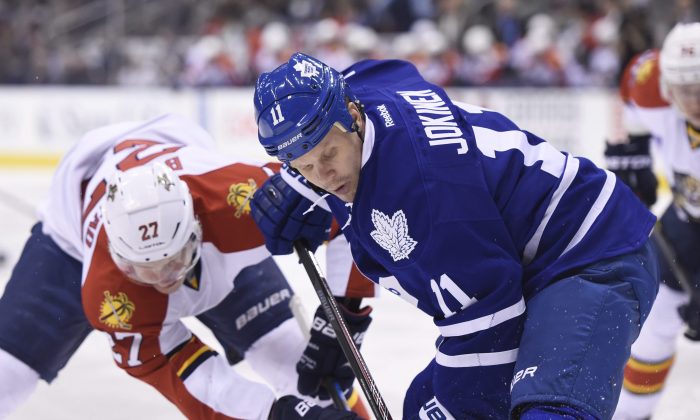 Olli Jokinen faces off against Nick Bjugstad as the Toronto Maple Leafs host the Florida Panthers in Toronto on Feb. 17, 2015. (The Canadian Press/Frank Gunn)
Canadian Content

Leafs on Display for All the Wrong Reasons

When the Toronto Maple Leafs acquired forward Olli Jokinen, they may have been envisioning a future asset, not an experienced centre.

Dave Nonis, Brendan Shanahan, and the team’s brain trust started the MLSE-approved rebuild this week by trading pending unrestricted free agents Cody Franson and Mike Santorelli to the Nashville Predators for a first round pick, a prospect in Brendan Leipsic, and Jokinen. The pick and the prospect are more likely to be in the Leafs’ long-term plans.

The Leafs had to take on Jokinen’s salary in order to make the trade more appealing to the Predators who allegedly broke a promise with the centre by playing him on the wing this season. The veteran is not likely long in Toronto and Nonis has about two weeks and a handful of games to showcase him to the rest of the league.

With Santorelli vacated from the third line centre position, Jokinen should get significant ice time as the Leafs try to sell his services to a playoff contender, though he played just 10:37 in Tuesday night’s loss to Florida.

This may seem like a familiar refrain to Leafs fans.

Recent campaigns have seen the Leafs acquire players on one-year or expiring contracts whether it be because they were a team in competitive flux or because they had limited cap space. The effects have been that pro scouts and executives with other NHL clubs have had more opportunities to see these players on the ever-popular and highly-marketed NHL institution that is the Maple Leafs.

Mason Raymond signed a one-year deal with Toronto last season and converted his 19 goals and 45 points into a three-year, $9 million contract with the Calgary Flames. Dave Bolland came to Toronto via trade and leveraged his exposure into a five-year, $27.5 million contract with the Florida Panthers. Cody Franson signed three consecutive one-year deals with Toronto, making his expiring contract that much more attractive to contending teams who did not want to add term to their salary cap.

Daniel Winnik appears to be the next most attractive player Nonis can use at his disposal and it’s not simply his expiring contract that has other NHL teams taking notice. Winnik’s largely effective play this season—he leads the Leafs with a +14 rating and the league in penalty kill ice time—has been on display in a way not possible with his former club, the Anaheim Ducks.

Though Winnik’s production is on par with his previous output—his 24 points is nearing his career-high of 30 set last year—he now finds himself in a position of joining a Stanley Cup-contender as opposed to signing a one-year deal with a middling team as he did with Toronto last offseason.

The Leafs have in some ways become not a destination for players who want to win, but a jumping-off point for players looking to get a raise by improving their stock. That’s not to say that each player had this in mind when joining the club, but that this is the new reality for a team taking a hard right towards rebuilding.

That process should be expedited for Jokinen who has now missed out on entering the playoffs with a first-place team in Nashville.

“I can’t say he was happy to be traded out of [Nashville],” said Jokinen’s agent, Ian Pulver to Sportsnet’s Fan 590.

What Jokinen can be satisfied with is the exposure he’ll receive on Canada’s most-debated if not most-watched club in the NHL. If he can impress anyone, he should be back in playoff contention within the next couple of weeks.

A rebuild does not guarantee success. A commitment to a long-term plan and the patience to withstand extensive losing from both the fan base and team management can begin to create an atmosphere where players understand their roles on the ice and the future they can be a part of. Nonis has not used the word “rebuild,” but at least naming the process might bring some consistency towards the team’s management approach.

Every NHL club should want a talent pool not with players who have one foot out the door, but with the willingness to jump in with both feet. Either way for the Leafs, all eyes are on them.

With a clearer plan for the future, the Leafs can make the most of selling high.

Joe Pack is a freelance writer based in Toronto covering sports and culture. Find him on Twitter @JoePack.