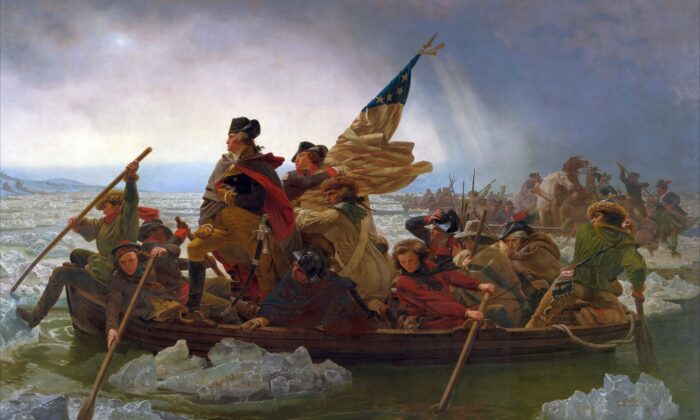 General George Washington (1732–1799) stands in the prow of a rowing boat crossing the Delaware to seek safety in Pennsylvania after defeat by the British. (Emanuel Gottlieb Leutze/Metropolitan Museum of Art via Wikimedia, public domain)
Viewpoints

Critical Race Theory continues to permeate our classrooms and infect our children’s minds with outrageous ideas about their nation’s history. But a growing number of Americans are standing up to fight back against its false tenets and demand its removal from K-12 education. At the forefront of this patriotic effort is 1776 Action, an advocacy group committed to the vital work of restoring honest and unifying education in public schools throughout the nation.

The group’s Candidate Pledge has garnered national attention in recent weeks for its emphasis on America’s values and its vow to eradicate divisive race- and gender-based ideologies such as CRT from America’s schools. Political candidates who sign the pledge commit to restoring “honest, patriotic education that cultivates in our children a profound love for our country” and to promoting a curriculum that “teaches that all children are created equal, have equal moral value under God, our Constitution, and the law, and are members of a national community united by our founding principles.” The pledge also seeks to prohibit any curriculum that divides students by race and sex—or sets out to infuse harmful ideologies into course material.

In May, Gov. Kristi Noem (R-S.D.) became the first candidate to sign the pledge, declaring that CRT and similarly divisive theories are “shameful [and] must be stopped.” Other high-profile conservatives running for office, such as Republican nominee for Governor of Virginia Glenn Youngkin, also vowed to replace CRT with “a high-quality civics curriculum.” The two Republican candidates for Governor of Kansas, former Gov. Dr. Jeff Colyer and Kansas Atty. Gen. Derek Schmidt, have also signed the pledge. As more candidates sign this pledge, it will put pressure on teachers, principals, and school boards to declare their stances on CRT and other key educational matters. It will also hold them accountable for the materials they teach and ensure our children are not indoctrinated with malicious theories that seek to denigrate our country and reduce students to their sex or skin color.

Unsurprisingly, the radical Left hates this pledge. Youngkin’s opponent in the governor’s race, former Virginia Gov. and current Democratic nominee Terry McAuliffe (D-Va.), refused to sign the pledge and went as far as to claim CRT is a “right-wing conspiracy” that is “totally made up by Donald Trump and Glenn Youngkin.” The reality on the ground, however, suggests the opposite. In response to McAuliffe, one Loudoun County parent said, “I find it comical that anyone running for office would make such a bold statement when anyone running, Republican or Democrat, should be sitting down with parents and listening to and addressing our concerns.” McAuliffe seems to be unaware that the Loudoun County school board has been immersed in fierce debates for weeks about CRT—and tensions are likely to continue until at least mid-August when a school board vote is scheduled.

In other parts of the country, governors and state legislatures are enacting legislation that echoes the 1776 Action Candidate Pledge and bans CRT from being taught in public schools. Most recently, Texas Gov. Greg Abbott signed into law House Bill 3979. This legislation outlaws the teaching of CRT and “protest civics”—mandatory student protests and lobbying activities that almost always overlap with progressive causes. The Texas law was modeled on the National Association of Scholars’ Partisanship Out of Civics Act, and it is the first to prohibit both practices in public K-12 education. But Texas isn’t alone. Anti-CRT bills have been either introduced or signed into law in 22 states—including in Ohio, Arizona, and New Hampshire—where 1776 Action has also run powerful television ads. Meanwhile, Republican North Carolina Lt. Gov. Mark Robinson has created a task force to investigate accusations of “indoctrination in the classroom,” and Florida’s state Board of Education has adopted rules forbidding CRT, saying that it would “distort historical events.”

As more public officials are pushing back against CRT, public opinion is changing—and for good reason. As former Atty. Gen. Bill Barr said in a recent speech to conservative group Alliance Defending Freedom, CRT is Marxism’s latest incarnation. It “is nothing more than the materialist philosophy of Marxism substituting racial antagonism for class antagonism. It posits all the same things as traditional Marxism,” Barr said. Like other forms of Marxism, CRT is fundamentally incompatible with Christianity and other traditional religions. This is because CRT and other progressive orthodoxies constitute a secular religion. As Barr said, the promotion of CRT by public schools may violate the Free Exercise and Establishment Clauses of the First Amendment. “There’s nothing more fundamental,” Barr said, “than the right of parents to pass religion to their children. And it’s monstrous for the state to interfere in that by indoctrinating students into alternative belief systems.”

Former President Donald Trump is also fighting against CRT. In a recent Real Clear Politics op-ed, the former president outlined a seven-step plan to eliminate CRT from our nation’s classrooms. Writing that the teaching of CRT verges on “psychological abuse,” President Trump called for measures such as state bans on taxpayer dollars going to any school that teaches CRT, appointment of state-level 1776 Commissions tasked with overseeing curricula, and the adoption of a universal voucher program that shields children from left-wing indoctrination by giving every parent the right to pick another school of their choice.

President Trump’s action plan, combined with the recent surge of anti-CRT legislation in nearly half of the states, is a good sign for Americans concerned about their children’s education and America’s future. On the first day of the new administration, President Joe Biden canceled President Trump’s 1776 Commission, which was created to promote our nation’s founding principles and to challenge the radical left-wing idea that America is a systemically racist country whose role in the world has been negative. Thankfully, Trump’s 1776 Commission still meets and recently restated its commitment to renew and restore patriotic education in all 50 states.

For those who love America and its history—and who believe in American exceptionalism and the promises of its principles—there is still much work to do. Through groups such as 1776 Action, we can use our voices to save our children’s futures, defend our deeply held values, and preserve our nation’s history for generations to come.