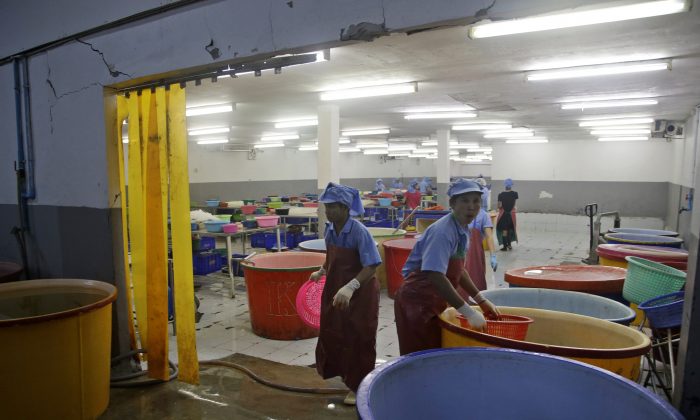 In this Monday, Nov. 9, 2015 photo, workers react during a raid on a shrimp shed conducted by Thailand's Department of Special Investigation in Samut Sakhon, Thailand. What constitutes modern-day slavery is often seen as an accepted way of doing business in Thailand's seafood export capital. Some shed owners say they are providing jobs to poor migrant workers. Police may be paid to look the other way, or may not even understand that practices such as forced labor and debt bondage are against the law. (AP Photo/Dita Alangkara)
Asia & Pacific

BANGKOK—The president of one of the world’s biggest seafood exporters expressed frustration and promised change on Tuesday, Dec. 15, after saying an Associated Press investigation that linked slave-peeled shrimp to his company should be a “wake-up call” to the industry.

Thiraphong Chansiri said Thai Union will spend millions of dollars to end reliance on poorly regulated contractors that have been responsible for much of the abuse. He added that under the current system, it’s almost impossible to ensure that supply chains are clean.

Like other exporters in Thailand, his company has for years relied heavily on poor migrants working in factories in the port town of Samut Sakhon to peel, gut, and devein shrimp.

The AP report revealed Monday, Dec. 14, that many of these laborers are undocumented and can end up being tricked or sold into factories where they are forced to work 16-hour days with no time off and little or no pay for sometimes years at a time. Some end up locked inside. Others are allowed to go out, but only if they leave their children or spouse behind as a guarantee against running away.

Thiraphong said that despite great efforts, Thai Union has been unable to keep labor abuses out of its supply chains. It has tried everything from spot checks by third-party auditors to regular meetings with external suppliers. But problems keep popping up.

“We realized that we could not ensure 100 percent,” he said. “Even with the whole system that we established.”

He said Thai Union will exclusively use in-house labor for shrimp processing starting Jan. 1, a change he said would cost the company about $5 million.

“This move will provide us with full oversight of all processing stages and will ensure that all workers, whether migrant or Thai, are in safe, legal employment and are treated fairly and with dignity,” Thiraphong said.

A day earlier, he called the latest revelations “another wake-up call not only to us, but to the entire industry.”

On Tuesday, the Global Aquaculture Alliance, which audits companies and offers a Best Aquaculture Practices seal of approval, said it will pull its certification from anyone outsourcing shrimp processing.

AP journalists followed trucks from an abusive factory raided last month to major Thai distributors, including a Thai Union subsidiary, and traced similar connections from another factory, raided in May, that was directly supplying the parent company.

Thai Union and four other exporters that bought shrimp from the sheds sell to companies around the world. Those retailers and restaurant chains widely condemned the practices that led to these conditions, and many said they were launching investigations.

According to U.S. and United Nations standards, if even a single piece of shrimp coming from a company is tied to forced labor, it taints the entire supply chain.

I guarantee you that if Wal-Mart and Kroger and Red Lobster stopped buying from Thailand until this got fixed, I think pretty soon Thailand would have no choice but to really deal with it.
— Buddy Galetti, president, Southwind Foods

Some said the problem requires a drastic response from big players.

“I guarantee you that if Wal-Mart and Kroger and Red Lobster stopped buying from Thailand until this got fixed, I think pretty soon Thailand would have no choice but to really deal with it,” said Buddy Galetti, president of Southwind Foods, a smaller importer in Los Angeles. He said he rarely buys Thai goods.

U.S. customs records show the shrimp AP tracked made its way into the supply chains of major U.S. food stores and retailers such as Wal-Mart, Kroger, Dollar General, and Petco, along with restaurants such as Olive Garden.

It also entered the supply chains of some of America’s best-known seafood brands and pet foods, including Chicken of the Sea and Fancy Feast, which are sold in grocery stores from Safeway and Schnucks to Piggly Wiggly and Albertsons. AP reporters went to supermarkets in all 50 states and found shrimp products from supply chains tainted with forced labor.

Earlier this year, after AP uncovered a slave island in Indonesia where fishermen were caged when on shore, Greenpeace called for a boycott of Thai Union and its Chicken of the Sea brand in the United States. On Monday, Greenpeace campaign director John Hocevar said Thai Union isn’t doing enough.

“The company does just enough to weather the PR storm while continuing to profit off the backs of the migrant workers forced to work throughout its supply chains,” he said.

Thailand has said repeatedly that it’s working to clean up its $7 billion seafood export industry, where abuses are fueled by corruption and police complicity.

In a front-page article Tuesday in the country’s biggest English-language newspaper, the Bangkok Post, Prime Minister Prayuth Chan-ocha said the country has already been cracking down on officers who turn a blind eye to labor abuses in processing plants.

Most U.S. customers said they’re sticking with their Thai distributors, and Gavin Gibbons, a spokesman for National Fisheries Institute, which represents about 75 percent of the U.S. seafood industry, said boycotting Thailand is not the answer.

“If you don’t buy seafood from there, you’re not in the conversation anymore about labor, you don’t have the ability to fix it,” he said.

AP’s findings surprised some consumers. “I’ve bought bags of shrimp before at the market but never really looked at the label. I guess I should start looking, huh?” said Chris York, of Kensington, New Hampshire.