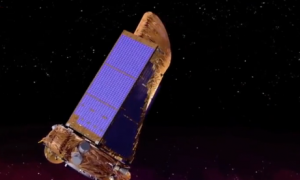 In a bold prediction, one of the world’s leading scientists claims NASA is close to discovering whether alien life truly exists.

Dr. John Grunsfeld, the physicist and former astronaut who heads NASA’s Science Mission Directorate was among a panel of scientists who spoke to the House Science, Space and Technology Committee on Tuesday.

Grunsfeld remarked, “Are we alone? Many, many people on planet Earth want to know…We are on the cusp of being able to answer that question.”

Grunsfeld and his fellow panelists urged legislators to continue current levels of funding for space exploration by describing recent developments in the field.

One such accomplishment is the New Horizons space probe, which recently completed the first-ever flyby of Pluto–the former planet on the outer edge of the solar system.

So far, only a small amount of data has made it back to Earth. Full transmission will take around 16 months.

Dr. Alan Stern, the New Horizons mission’s principal investigator noted, “We found evidence of nitrogen glaciers…[and]…A mountain range as tall as the Rockies…This is quite a ride, scientifically.”

In addition to Pluto’s wealth of information, the search for alien life has been buoyed by NASA’s recent discovery of a potentially-Earth-like planet 1400 light years away.

The planet, Kepler-452b, resides in a “habitable zone” where temperatures would theoretically allow for liquid water, and with it, life.