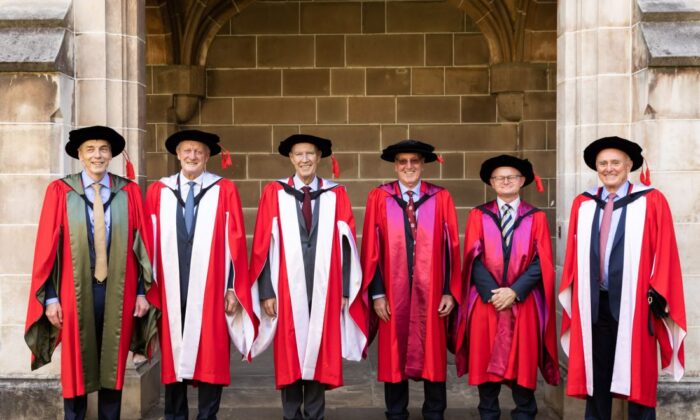 Australia’s largest medical research foundation has been criticised for prioritising “equality” over “merits” after cutting the University of Melbourne from future grants because the school awarded its honorary doctorates to six white men.

The Snow Medical Research Foundation, which has donated over AU$90 million (US$65 million) to medical research in the last two years and donated $16 million to Melbourne University in 2021, suspended the institution from future applications of Snow’s prestigious fellowship program on March 7.

The funding freeze was announced a week after Melbourne University published a photo of six Caucasian men receiving the school’s honorary doctorates during a ceremony with a press release outlining their achievements.

Snow Medical Chair Tom Snow, who is also chair of LGBT+ group Equality Australia, accused the university of having sent “a message to every woman and person of diversity that white men will be rewarded ahead of you.”

“This award is not just about rewarding amazing things that these people have done. It’s also about sending a signal and being an inspiration to people,” he told the ABC on March 8.

In a statement, the foundation said only men had been appointed with honorary doctorates over the last three years at Melbourne University, an outcome that Snow Medical believed does not align with the university’s stated goals of gender equality and diversity.

This comes despite the university previously noting on its website that other receivers of the award, including three women and an Indigenous man, couldn’t attend the in-person ceremony and that these honorary doctorates will be conferred at a later date.

Tom Snow, however, insisted the university should have responded by deferring the ceremony.

Social commentator and men’s issues advocate Bettina Arndt argued that even if white men were the only recipients on this occasion “surely a university must make such awards on the basis of intellectual merit,” not a person’s physical attributes or skin colour.

A former self-proclaimed feminist, Arndt, said “it is an insult to the university to suggest that they should allow rewards for scholarship to be at the whim of bullies,” such as private benefactors promoting identity politics.

“Most ordinary Australians are appalled to find our universities being captured by this dangerous ideological push,” she told The Epoch Times.

The reputation of Australia’s higher education system is already “suffering” as a result of the gender and cultural equality movement, Arndt noted. This comes “to the great pleasure, no doubt of our Asian competitors who welcome the brain drain which includes some of our best and brightest, who happen to be white men.”

“We are now seeing promotion committees in our universities systematically discriminating in favour of women who are rapidly making their way through to the higher ranks of these institutions,” she said.

“The fact that there are still some men at the top reflects the fact that in the past when decisions were made on merit, more men were willing and able to put in the huge hours required to crawl up the ladder.”

In response to the funding halt, Melbourne University said Snow Medical had made its decision based on a single event, which was “not a true reflection” of the university and the steps it was taking “to build a diverse university community, reflective of broader society.”

A number of academic individuals applauded the Foundation’s action as an advocacy act for diversity. Doug Hilton, head of WEHI medical research institute, told the Australian he thought it was “fabulous” when a foundation or funding organisation “links their culture or aspirations to the money.”

However, University of Queensland’s Emeritus Professor of Law Gabriel Moens believed the Foundation’s response to the situation reveals favouritism towards “equality of results.”

While gender equality is “reasonable” in the sense that everyone deserves to be treated equally, it is also “unreasonable” because the movement does not recognise that the achievement gap, including pay differentials between men and women, are often caused by issues that “have nothing to do with discrimination,” he added.

Among them are individual choice and the fact that women often take time out of their careers for child-rearing purposes.

Rather than equality of results, people should strive for “equality of opportunity,” which would remove all impediments to employment, Moens suggested. However, the outcome might not reflect the numerical strength of different groups/sexes in society.

The law professor also told The Epoch Times he doesn’t believe there is “systemic bias” against women and indigenous people in academic fields as it would be “very unwise.”

“Bias is the enemy of progress and violates the principle that people should be treated in a dignified manner and that their individuality is recognised,” he added.