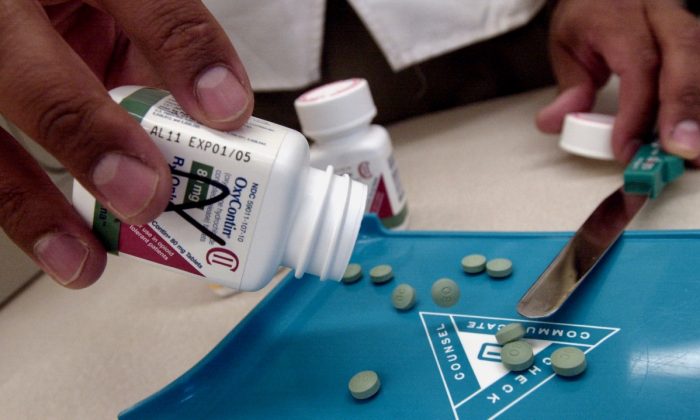 The prescription medicine OxyContin is displayed at a Walgreens drugstore in Brookline, MA on August 21, 2001. (Photo by Darren McCollester/Getty Images)
US News

Manufacturer of the powerful opioid painkiller OxyContin, Purdue, has said it will stop promoting opioid drugs to doctors.

Purdue has reduced over half its sales staff and will stop sending them out to doctor’s offices to talk about their opioid products. Instead, the remaining sales staff will focus on marketing other medications, Fox News reported.

The decision comes after a series of lawsuits blamed the drug maker for helping trigger the opioid epidemic, the Los Angeles Times reported.

“We have restructured and significantly reduced our commercial operation and will no longer be promoting opioids to prescribers,” the company said in a statement obtained by the Times. “Going forward, questions and requests for information about our opioid products will be handled through direct communications with … our medical affairs department.”

Dr. Andrew Kolodny, director of opioid policy research at Brandeis University, told the Times that the decision comes too late.

“The genie is already out of the bottle,” said Kolodny, according to the Times. “Millions of Americans are now opioid-addicted because the campaign that Purdue and other opioid manufacturers used to increase prescribing worked well. ”

According to Fox News, Purdue’s promotions for the product minimized the risks associated with the opioid painkiller and exaggerated its safe use.

Kolodny said that Purdue is still using that same strategy to market opioids in other countries.

“If it takes off the way it did in the United States, these other countries will be dealing with the same problem we are dealing with today,” he told the Times.

Kolodny also thinks that the changes in marketing won’t make an impact if other opioid makers don’t also cease promoting their opioid drugs.

OxyContin has made Purdue tens of billions of dollars over the last two decades. More than 7 million Americans have abused OxyContin since it was introduced in 1996.

“The Sackler family and their private company, Purdue Pharma, built their empire with the lives of hundreds of thousands,” wrote photographer Nan Goldin, a former OxyContin addict, in Artforum magazine. The family has used a lot of its wealth to support art institutions.

Purdue earlier made efforts to reduce opioid abuse by making its pills more difficult to ingest in the ways illegal drug users are likely to use, including through the nose, by smoking, or through injection, the Times reported. But instead of curtailing deaths, former OxyContin abusers switched to heroin, and the epidemic continued with no reduction in the net amount of deaths, according to the Times.