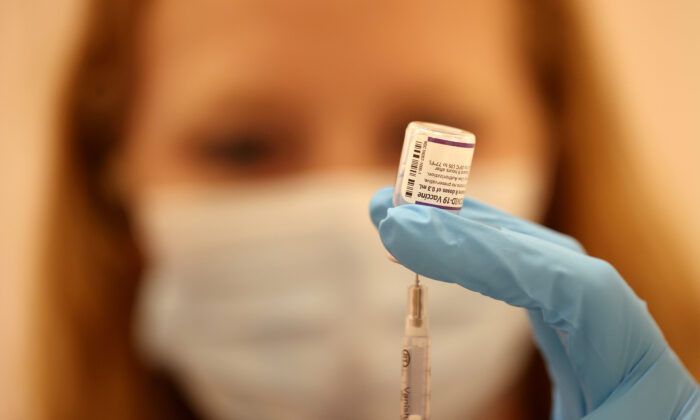 Dozens of health organizations, including the American Medical Association, said that businesses should voluntarily implement President Joe Biden’s COVID-19 vaccine-or-test mandate even though the rule was temporarily blocked by a U.S. appeals court last week.

And earlier this week, the Occupational Safety and Health Administration (OSHA)—the agency enforcing the rule—confirmed that it stopped enforcement of the mandate.

The health groups said in a joint statement, “We—physicians, nurses and advanced practice clinicians, health experts, and health care professional societies—fully support the requirement that workers at companies with over 100 workers be vaccinated or tested.”

They argued that the mandate is “reasonable” and should be implemented on a voluntary basis to “protect workers.”

Earlier this month, OSHA issued the rule that requires businesses with 100 or more workers to implement a rule mandating that employees either get a COVID-19 vaccine or submit to weekly testing. Unvaccinated workers would be forced to wear masks indoors starting Dec. 4, and they’ll have to undergo weekly testing if they remain unvaccinated by Jan. 4.

After it was unveiled, it sparked an avalanche of lawsuits from Republican states, senators, businesses, and other organizations arguing that the White House had exceeded its authority. The U.S. 5th Court of Appeals upheld its own stay of the rule last week, prompting OSHA to suspend enforcement of it.

In a statement on its website, OSHA wrote that the court told the agency to “‘take no steps to implement or enforce’ the ETS [Emergency Temporary Standard] ‘until further court order.'”

“While OSHA remains confident in its authority to protect workers in emergencies, OSHA has suspended activities related to the implementation and enforcement of the ETS pending future developments in the litigation,” the agency said.

Hundreds of Republican lawmakers, including all 50 GOP senators, announced this week that they would challenge it. The senators said they would attempt to force a vote on the mandate under the Congressional Review Act.

“Requiring masks for all unvaccinated workers by the December 5th deadline will be key to keeping customers and fellow workers safe during the holiday shopping and travel season,” they wrote, without addressing widespread concerns about the legality or feasibility of mandatory vaccinations. “From the first day of this pandemic, businesses have wanted to vanquish this virus.”

According to data provided by the Centers for Disease Control and Prevention, about 47 million U.S. COVID-19 cases and about 762,000 deaths have been reported so far since the start of the pandemic in early 2020. John Hopkins University estimates that the COVID-19 case-to-fatality ratio in the United States is about 1.6 percent.