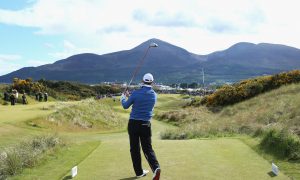 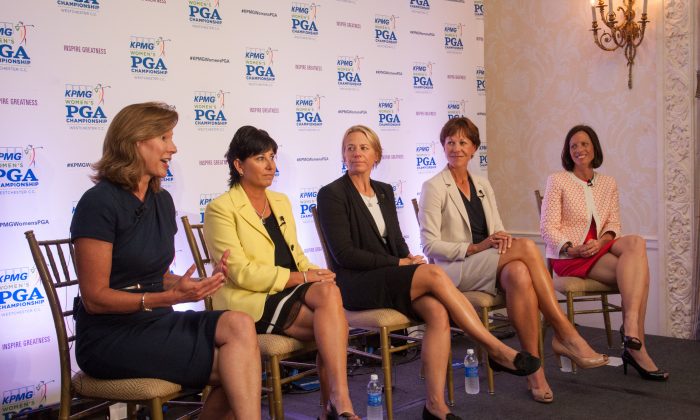 Harrison, NY—In 2003 Martha Burke staged a very public protest outside the gates of Augusta National Golf Club—home of The Masters. At that time Augusta National was the poster child within golf for exclusionary policies against woman. In the years that followed Augusta National did bring into the fold two women members but the inclusion was little more than a surface level answer.

Fast forward to 2015 and the state of golf—most notably in the USA—is one in which fewer people are playing the game and the reasons have been known for quite some time. Golf takes too long to play, is not cost effective for broader range of income levels and is difficult to learn as effective teaching is not reaching the wider array of players at different entry points.

This week’s KPMG Women’s PGA Championship, being played at Westchester CC, is a clear attempt by an array of partners to highlight the elevation of the former LPGA Championship but also to create a future agenda that inspires more women to play golf—not only for egalitarian reasons but for the sport’s long term health.

Prior to today’s kick-off for the 72-hole event, key segment leaders gathered Wednesday to speak about the different approaches needed to further develop and promote if women are going to be induced to play and remain for the long term with golf being their chief recreational outlet.

In recent years, the desire to expand the role of women within golf has been spoken about but the impact to date has been extremely limited. Golf Datatech, LLC, the industry’s leading independent research firm for consumer, trade and retail golf trends and performance, conducted a recent overview and the conclusions were clear—if not startling. Women make up slightly more than 50% of the total population, yet constitute barely 25% of the total players. “Combine the cost, time and family pressures with their overall perception of the male orientations at the golf course, and it’s not surprising that women leave the game as often as they enter. This is ultimately the basis for the women’s golf population to be at a near standstill,” said Tom Stine, partner at Golf Datatech.

The leadership summit has a few elements that in years part were not present. Prospective company leaders who are female have climbed the corporate ladder and will now influence how valuable company resources are allocated—most notably on the sports sponsorship side.

Clearly, the involvement of the PGA of America in co-sponsoring the former LPGA Championship is a major development and something that likely would never have happened only a few years ago. New leadership breeds new directions. After last year’s ouster of former President Ted Bishop because of inappropriate comments sent via social media, the PGA of America opted in making a major commitment in showing how critical the promotion of women’s golf is in creating momentum that will filter down to the grass roots level.

Yet Stine goes further in his summary conclusion. “To effectively tap into the women’s market, golf courses, golf professionals, equipment manufacturers and all other engrained constituencies must make the game more accessible and welcoming to the female player. This study shows that the women’s golf market remains underdeveloped and underserved.”

The leadership press event showcased different key leaders—among them U.S. chairman and CEO elect of KPMG, Lynne Doughtie; Chief teaching officer and LPGA Foundation President Nancy Henderson; Hall-of-Famer and long time world #1 player Annika Sorenstam; Secretary of The PGA of America Suzy Whaley, the first executive board member elected by that organization. And president of NASDAQ—Adina Friedman.Sorenstam stated, “Because I think golf is a game of life. I think everybody can play. I see it more now when I stepped away. It’s a game that everybody can participate as a family but also use as a business tool.”

The acknowledgement is really not new, what remains is the implementation and follow-ups.

KPMG, in concert with the PGA of America and LPGA, chose the New York metropolitan area for a clear reason in its initial sponsorship. Use the biggest market to create the biggest impact. NBC Sports will telecast the event nationally during this weekend. The field contains all the game’s best players and the venue was the long time home for many years of the former Westchester Classic—one of the PGA Tour’s great events which has now been morphed into The Barclay’s, the first leg of the Fed-Ex Playoffs. Yet, with the NBA and NHL finals taking place and the Men’s U.S. Open next week will the attention span be more than just momentary?

Will all of those elements that have gathered at Westchester CC make a startling difference? That’s hard to say. Golf’s long term potential as a viable product can only happen when the other side of the gender aisle is courted seriously and continually. The details—and results—are a work in progress. However, the intensity and zest to make it happen have never been more concentrated. Is the male dominated golf industry ready to listen and act? That remains to be seen but a united female front can certainly shape the golf industry in much the same manner as other influences that have been carried out in other major areas throughout American society.