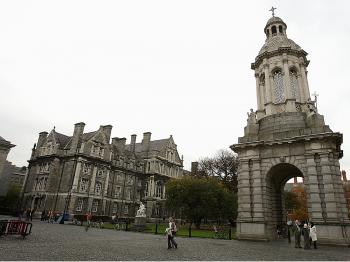 A forum on 'Where to Now, Ethics in a Changing World' was held at Trinity College Dublin, Ireland. (Chris Jackson/Getty Images)
US

Rita O'Connor
View profile
Follow
biggersmaller
Print
On Saturday November 28th a discussion forum on the topic “Where to Now, Ethics in a Changing World” took place in the Synge Theatre of Trinity College.

The panel began by discussing where we get our ethics from. They agreed that all religions are guided by the same basic principles of being good to others and that each person in society has an innate sense of right and wrong. They suggested that most people in society are guided by the principals of one religion or other.

Trocaire Director Justin Kilkullen speaking during the event said, “For the 40% of Irish people who still go to church the recent revelations of the Murphy Report are especially painful and there has to be accountability or the Church will decline brick by brick.“

Mr Killkullen added, “The same institutions have been in power working side by side for the last 40 years and there has been no reality checks for decades and the rot is pouring out in a big gush, what is needed is radical change, but”, he asked, “where are all the revolutionaries?”

Chairman Bryan Dobson commented, “The country finds itself in an unprecedented crisis at the moment, but as a politician said recently, ‘never waste a good crisis – use it to change things.’ There is definitely going to be change over the next few years but whether it will be for the better or worse only time will tell.”

Father McVerry who also spoke at the meeting added, “We must not fall into apathy. Apathy is the real enemy. A population that doesn’t care doesn’t vote, and a population that is only interested in leading their own lives is in real danger. “

The event at the J.M. Synge theatre was organised jointly by the Church of Ireland Chaplaincy TCD and the Open Christianity Network.