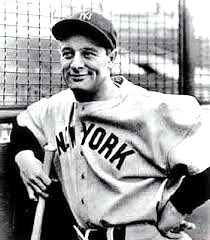 “Today, I consider myself the luckiest man on the face of the earth.”—New York Yankee Captain Lou Gehrig, July 4, 1939

After a lifetime of baseball heroics, Gehrig was only 36 years old and dying from amyotrophic lateral sclerosis. This incurable and neuromuscular disorder came to be known as “Lou Gehrig’s disease.”

At Yankee Stadium, more than 62,000 fans listened to Gehrig on that fateful 1939 day and experienced one of America’s most legendary speeches:

“Fans, for the past two weeks, you’ve been reading about a bad break … Yet, today, I consider myself the luckiest man on the face of the earth …”

We do well to reflect on the life of Lou Gehrig—not only because he was one of the greatest baseball players on the field but because of his attitude off the field.

In an age of continuous scandal throughout not only sports but all of society, Gehrig stands as a pre-eminent hero who exemplified leadership, character and courage.

I spent many days at Yankee Stadium with my son Austin during his childhood. We enjoyed regular season games, playoffs, and the World Series. Ticket stubs and memorabilia are proudly enshrined in various family scrapbooks and throughout my home.

During each game, Austin wore the No. 21 jersey of his favorite player, Paul O’Neill. I wore the No. 4 jersey of my all time favorite, Lou Gehrig. Our experiences provided many memories and forged a priceless father-and-son bond.

Aside from enjoying the Yankees with my son, my experiences as a confidant to the New York Yankees during the 1980s are priceless memories. These experiences were shared in my first book and included 28 personal letters to the fans by various Yankees written at my request.

But by far my favorite baseball experience is coaching my son’s little league team for seven years and sharing Gehrig stories, as well as personal Yankee experiences, to inspire sportsmanship with his team.

I believe youth sports venues should be packed with parents and loved ones, so coaching my son’s team was not only a privilege but a responsibility. The years of childhood fly by quickly and provide a treasure-trove of opportunity for developing character, community, and family through parental support and example.

Pride of the Yankees

Immortalized as the Pride of the Yankees, Lou Gehrig’s durability is reflected in his playing in 2,130 consecutive games from 1925 to 1939.

Complementing this record that stood for decades, Gehrig held another record of 23 career grand slams for over 50 years. He had a .340 lifetime batting average, won the American League MVP Award in 1927 and 1936, and earned the Triple Crown in 1934. On June 3, 1932, Gehrig was the first player to ever hit 4 homeruns in a game.

Gehrig personified character throughout his life, beginning with his humble upbringing in New York City, where he was the only one of four children to survive poor parents.

He played games despite having a broken thumb, broken toe, and back spasms. Toward the twilight of his career, doctors X-rayed Gehrig’s hands and observed 17 different fractures that healed during his years of play.

Perhaps Richard Vidmer, a reporter for the Herald Tribune covering the story the day after Gehrig’s July 4, 1939, speech, expressed the character of Lou Gehrig best:

“Somehow I felt that at the Stadium yesterday not a great baseball player but a truly great sportsman who could take his triumphs with sincere modesty and could face tragedy with a smile. His records will attest to future generations that Lou Gehrig was one of the greatest baseball players who ever lived, but only those who have been fortunate enough to have known him during his most glorious years will realize that he has stood for something finer than merely a great baseball player—that he stood for everything that makes sports important in the American scene.”