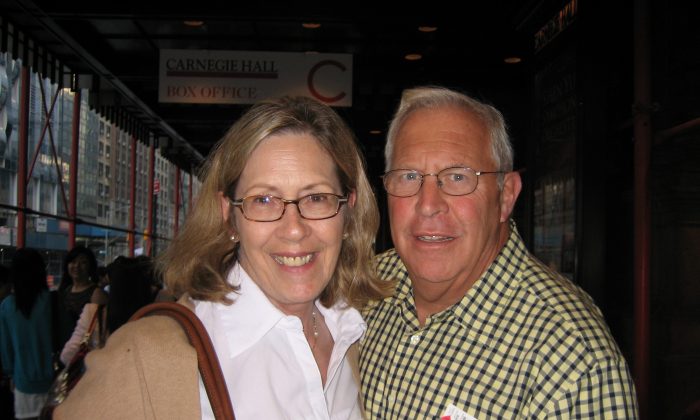 “Outstanding, [it] fully exceeded our expectations,” Mr. Mager said. “The three trumpets were out of this world.”

The orchestra delivers a first-of-its-kind sound that blends the music instruments of classical Western orchestra and ancient Chinese instruments.

“The music was outstanding, I loved the tenor, the sopranos,” she said. Mrs. Mager particularly liked the sounds of the Chinese traditional instrument—the pipa.

The pipa, or Chinese lute, has reigned as the “king” of Chinese folk instruments for thousands of years, according to the Shen Yun website.

“This plucked instrument is often found in the hands of heavenly maidens depicted in traditional paintings,” according to the website. “The pipa’s construction further epitomizes ancient Chinese belief. Its body, by traditional Chinese measurement, is three feet five inches, representing the three powers—heaven, the earth, and man, and the five elements—metal, wood, water, fire, and earth. Meanwhile, the four strings represent the four seasons. Its playing technique is quite difficult—it is plucked while held upright on the knee—and it is one of the most expressive Chinese instruments.”

Shen Yun Symphony Orchestra is the orchestra of Shen Yun Performing Arts company. Shen Yun, established in 2006 in New York as a nonprofit, aims to revive lost traditions and nourish positive values of Chinese culture, according to the website.

“It was a beautiful blend of old and new,” Mr. Mager said.

With reporting by Kristina Skorbach