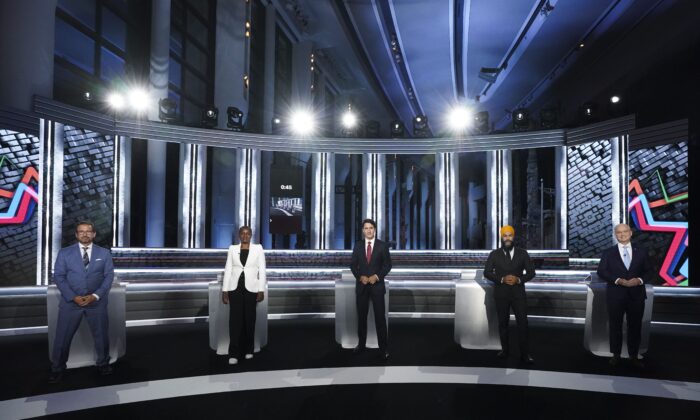 A question on where the next prime minister will stand when it comes to the “trade off” between Canada’s economic growth and recognizing the Chinese regime’s human rights violations sparked fiery exchanges among party leaders during the English debate on Thursday night.

Liberal Leader Justin Trudeau was quick to jump in the moment NDP Leader Jagmeet Singh finished his argument that Canada has to do “everything possible to secure the release” of Michael Kovrig and Michael Spavor, who have been arbitrarily detained in China since December 2018.

“That’s exactly what we’ve been doing. Over the past three years, we have worked with international allies to put pressure on China in every single one of their meetings,” Trudeau said.

Trudeau said his government has worked closely with the United States and the G7, and has been challenging China on human rights, economic competitiveness, and holding the regime accountable to the rule of law.

“Canada’s voice has been very strong on that,” he said.

“Sir, you did not show up for a vote declaring a genocide towards the Uyghur people. You didn’t show up.”

In February, a majority of MPs voted in favour of a motion to recognize that the CCP’s campaign against Uyghurs and other Muslim minorities constitutes a genocide. Trudeau and his cabinet did not show up except for Foreign Affairs Minister Marc Garneau, who voted on behalf of the cabinet to abstain from voting on the motion.

“If you want to … get the Michaels home, you do not simply lob tomatoes across the Pacific. That is what Mr. Harper [former prime minister Stephen Harper] tried for a number of years, and didn’t get anywhere,” he replied to O’Toole. “You need to engage in a sophisticated way with our allies.”

“When the Uyghurs ask us for help to declare a genocide and when we don’t do that … then our word doesn’t count for much,” she said.

Accusing Trudeau of not doing enough when it comes to human rights issues, Blanchet cited the plight of Kovrig and Spavor, Uyghur Muslims, and the situation in Hong Kong, among several examples.

Agreeing with Blanchet, O’Toole said, “We may be smaller than China with respect to population and economy, but we are a giant when it comes to our commitments to human rights, to dignity, and to the rule of law.”

He added that Canada must take a more serious approach on China’s human rights violations, defend fair trade for Canadian workers, and make sure “our voice is a principled one on the world stage again.”