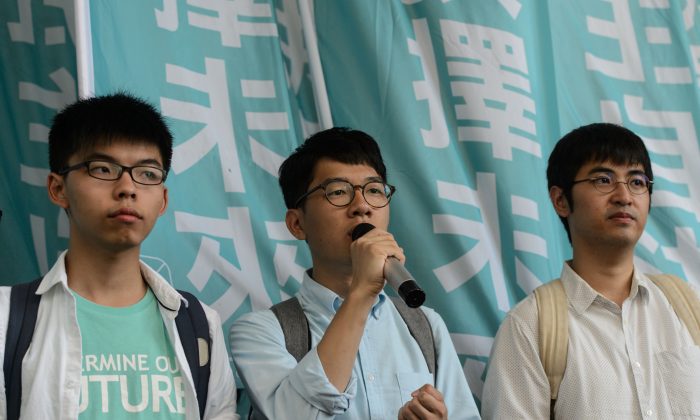 Pro-democracy political activists and members of the Demosisto party (L to R) Joshua Wong, Nathan Law and Alex Chow, speak as they arrive at the Eastern Court in Hong Kong on July 21, 2016. The three were to face a court verdict over charges related to a protest leading up to pro-democracy rallies in 2014. (ANTHONY WALLACE/AFP/Getty Images)
China

Three student leaders of Hong Kong’s Umbrella Movement were convicted on July 21 for their involvement in the city’s largest ever show of civil disobedience against communist control.

The three had played a pivotal role in the 79-day “Occupy Central” demonstrations, or Umbrella Movement—a student-led protest in Hong Kong that sparked into a citywide movement—on Sept. 26, 2014.

Joshua Wong and Alex Chow were charged of unlawful assembly by the Eastern Magistrates’ Court, while Nathan Law was found guilty of inciting others to climb into the fenced-in square in front of government headquarters during the protests, an act the court ruled illegal.

The student leaders said they had no regrets.

“No matter what penalty we will receive, we will continue fighting against suppression from the government,” 19-year-old Wong, secretary general of the newly-formed pro-democracy party Demosistō, told Associated Press following the verdict. “We know that facing the largest communist regime in the world is a long battle for us to fight for democracy.”

“Compared to rights activists on the mainland, the price I pay is nothing,” Wong wrote on Facebook.

“I think the verdict does not mark the ultimate conclusion, it simply indicates the ending of this case, yet it has inspired everyone who participated in the Civic Square action and Umbrella Movement, to continue to stand upright and move forward,” Chow told reporters in the same interview.

The prosecution sent “a chilling warning for freedom of expression and peaceful assembly in the city,” said Amnesty International in a press release.

“The prosecution of student leaders on vague charges smacks of political payback by the authorities,” said Mabel Au, Director of Amnesty International Hong Kong. “The continued persecution of prominent figures of the Umbrella Movement is a blow to freedom of expression and peaceful assembly in Hong Kong.”

If sentenced to prison, the three will become Hong Kong’s first political prisoners, according to WSJ.

Turmoil in Hong Kong ICAC: Leung Camp Shoots Itself In The Foot

The movement, which marked one of Hong Kong’s largest and boldest attempts to challenge Beijing authority, saw hundreds of thousands taking to the streets to seek true democratic elections, which police tried to suppress with pepper spray and batons. Nearly 1,000 were arrested, 216 of whom were prosecuted or are facing charges.

The three have been released on bail until their sentence on Aug. 15, which could result in community service or up to two years in prison.

The conviction may render Law ineligible for the upcoming Legislative Council election in September. According to Hong Kong law, candidates can lose their eligibility if sentenced to more than three months in jail or are in prison at the time of election.

Wong posted a photo on Facebook reading “just as steadfast as we were at the beginning,” which has received over 2,400 likes and an outpouring of support in the 24 hours since it was posted.

“Watching television today, it again called to mind that scene, where a group of college students—including me—were violently pushed, pepper sprayed, and had umbrellas snatched away by rows of robotic armed police from dusk until dawn,” wrote Facebook user Anson Lsc on the post. “Don’t forget your initial resolve.”

“History will restore justice and clear your name,” another commenter wrote.