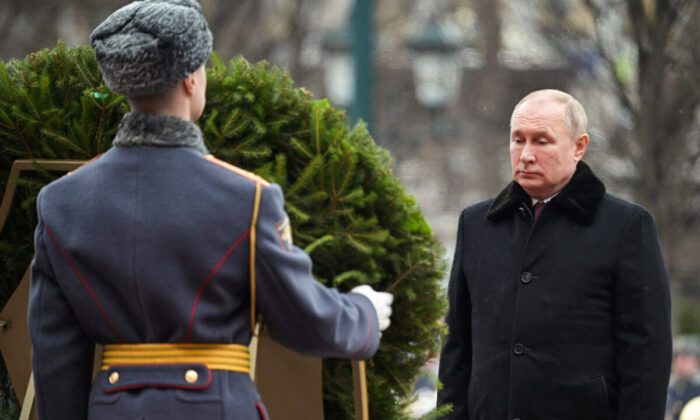 Russian President Vladimir Putin takes part in a wreath laying ceremony at the Tomb of the Unknown Soldier by the Kremlin Wall on the Defender of the Fatherland Day in Moscow, Russia, on Feb. 23, 2022. (Sputnik/Aleksey Nikolskyi/Kremlin via Reuters)
Europe

Peskov alleged that the two heads of the separatist regions believe there are “threats from Kyiv” against citizens in Donetsk and Luhansk.

Ukrainian officials have categorically denied attacking the Russian military or forces loyal to the two separatist regions, while Kirby told reporters that he believes Moscow is attempting “false flags” to justify an invasion of Ukraine.

“We continue to see him form his capabilities in such a way that leads us to believe that we are potentially close to some sort of action,” Kirby said Wednesday. “Russian forces continue to assemble closer to the border and put themselves in advance stage of readiness to act … virtually any time now,” he added. “We believe they are ready.”

On Wednesday, shelling intensified at the line of contact in eastern Ukraine, and alleged witnesses told Reuters that convoys of military equipment including nine tanks moved toward eastern Ukraine’s Donetsk from the direction of the Russian border.

“Predicting what might be the next step of Russia, the separatists or the personal decisions of the Russian president—I cannot say,” Ukraine’s President Volodymyr Zelensky said.

The Ukrainian government and state websites, which have experienced outages in recent weeks blamed by Kyiv on cyberattacks, were again offline on Wednesday. Its parliament, cabinet, and foreign ministry websites were affected.

Meanwhile, Putin on Wednesday claimed he is still finding diplomatic solutions but that “the interests of Russia and the security of our citizens are unconditional for us.”

President Joe Biden, who unleashed sanctions on Russian banks and sovereign debt on Tuesday, said the U.S. will impose sanctions on the operator of the Nord Stream 2 pipeline that spans from Russia to Germany, essentially reinstating sanctions that were placed on the pipeline under the Trump administration.

“I have directed my administration to impose sanctions on Nord Stream 2 AG and its corporate officers. These steps are another piece of our initial tranche of sanctions in response to Russia’s actions in Ukraine,” he said.