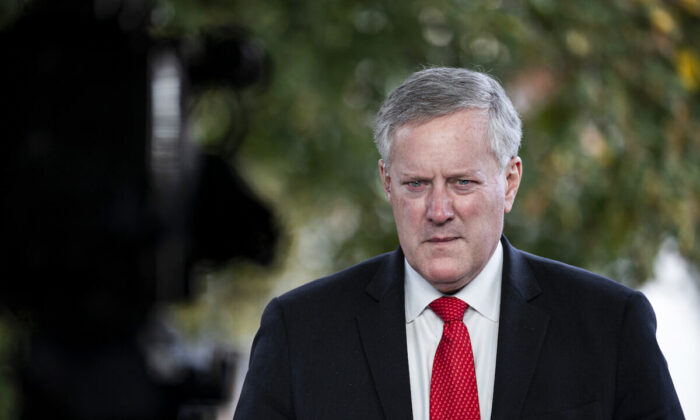 Leaders of the House of Representatives’ panel investigating the Jan. 6, 2021, breach of the U.S. Capitol on June 3 decried the Department of Justice’s reported decision not to indict Mark Meadows and Dan Scavino, two former aides of ex-President Donald Trump.

At the same time, the panel praised the department’s indictment of Peter Navarro, another former aide.

“While today’s indictment of Peter Navarro was the correct decision by the Justice Department, we find the decision to reward Mark Meadows and Dan Scavino for their continued attack on the rule of law puzzling,” Rep. Bennie Thompson (D-Miss.), chairman of the panel, and Rep. Liz Cheney (R-Wyo.), chairwoman of the panel, said in a joint statement.

“Mr. Meadows and Mr. Scavino unquestionably have relevant knowledge about President Trump’s role in the efforts to overturn the 2020 election and the events of January 6th. We hope the Department provides greater clarity on this matter.”

The Department of Justice (DOJ) did not pick up the phone on Saturday.

According to reports, U.S. Attorney for the District of Columbia Matthew Graves, a Biden appointee, informed House counsel Douglas Letter on Friday that the department was rejecting the House’s request that Meadows and Scavino be charged with contempt of Congress because they’re not cooperating with the panel’s investigation.

“We are gratified by DOJ’s decision to decline prosecution despite the bombast and lack of legal basis for the subpoena emanating from the Jan. 6 committee,” Stanley Brand, a lawyer representing Scavino, told The Epoch Times via email.

“The result speaks for itself,” George Terwilliger III, Meadows’ lawyer, told The Epoch Times in an email.

Both men had argued that they were shielded from testifying about at least some matters by executive privilege, which protects certain communications and meetings of presidents and their advisers for a period of time after they leave office.

The panel “told reporters outside federal court in Washington that the subpoenas issued by the panel are “unlawful … and unenforceable” in part because the committee doesn’t include any members picked by McCarthy,” Meadows said in a suit against the panel that is ongoing.

Trump has claimed the privilege but President Joe Biden agreed to waive it for the Jan. 6 panel, which strengthened accusations that the committee and its supporters are on a partisan mission.

The panel is dominated by Democrats and the only two Republicans, Cheney and Rep. Adam Kinzinger (R-Ill.) were appointed by House Speaker Nancy Pelosi (D-Calif.) after she rejected members proposed by House Minority Leader Kevin McCarthy (R-Calif.) Both Cheney and Kinzinger regularly criticize Trump, and voted to impeach him.

Thompson and Cheney said that the question of whether former Trump advisors have “absolute immunity” from sitting for testimony before Congress because of their former positions is the focus of pending litigation but that Meadows’ claim that he is entitled to absolute immunity “is not correct or justified” based on DOJ memorandums. “No one is above the law,” they said.

Steve Bannon, another former Trump aide, was charged earlier this year with contempt of Congress. Navarro was indicted on two counts of contempt of Congress on Friday. He told reporters outside federal court in Washington that the subpoenas issued by the panel are “unlawful … and unenforceable” in part because the committee doesn’t include any members picked by McCarthy.