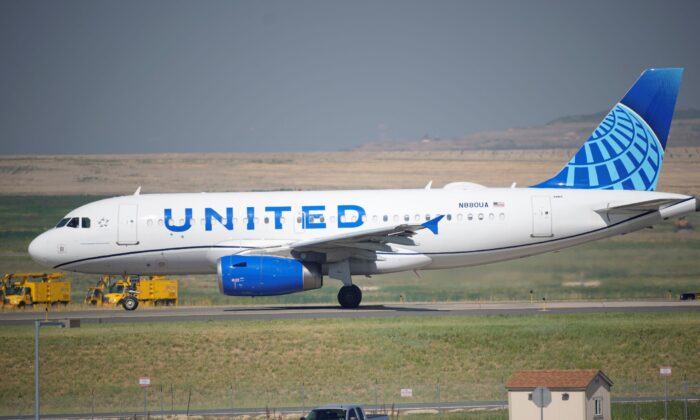 A United Airlines jetliner taxis down a runway for take off from Denver International Airport in Denver, Colo., on July 2, 2021. (David Zalubowski/AP Photo)
US News

The advocacy group Airlines for America issued President Joe Biden a letter demanding the end of mask mandates for transportation, and other COVID-19 requirements, such as pre-departure testing for international flights.

The letter from the group’s board of directors was signed by the leaders of 10 major U.S. airlines, including American Airlines, United Airlines Holdings, Delta Air Lines, and Southwest Airlines.

“We are encouraged by the current data and the lifting of COVID-19 restrictions from coast to coast, which indicate it is past time to eliminate COVID-era transportation policies,” the group wrote in its letter, which comes as overall numbers of infections decline in the nation, according to data from the Centers for Disease Control and Prevention (CDC).

The airlines’ CEOs and presidents said they implemented various policies voluntarily at the start, including mask mandates, contact tracing, and enhancing cleaning protocols, and later followed measures imposed by the CDC including pre-departure testing and vaccination requirements for international travelers.

“However, much has changed since these measures were imposed and they no longer make sense in the current public health context. The persistent and steady decline of hospitalization and death rates are the most compelling indicators that our country is well protected against severe disease from COVID-19,” the group wrote.

“Given that we have entered a different phase of dealing with this virus, we strongly support your view that ‘COVID-19 need no longer control our lives.’

“Now is the time for the Administration to sunset federal transportation travel restrictions—including the international predeparture testing requirement and the federal mask mandate—that are no longer aligned with the realities of the current epidemiological environment.”

The letter comes as BA.2, a subvariant of the Omicron strain of the novel coronavirus, now accounts for over a third of new COVID-19 cases in the country, according to CDC data. BA.2 doesn’t appear to cause more severe disease, but it’s more transmissible than the original Omicron BA.1 variant.

CDC Director Rochelle Walensky said on March 23 that New York, where BA.2 is the dominant variant, has seen small increases in infections. She said there’s been no indication so far of an increase in severe disease that would strain the hospital system.

The Transportation Security Administration (TSA) announced on March 10 that it was extending the face mask mandate for public transportation, which includes airplanes, until April 18. The extension was based on a recommendation from the CDC. The order was otherwise due to expire on March 18.

“It makes no sense that people are still required to wear masks on airplanes, yet are allowed to congregate in crowded restaurants, schools and at sporting events without masks, despite none of these venues having the protective air filtration system that aircraft do,” the airline letter said.

The TSA recently reported it had issued more than $640,000 in fines to over 900 people who didn’t comply with the mask mandates. Most of the fines came onboard airplanes, where 788 people were fined for a total of over $500,000, averaging about $636 per fine.

The White House didn’t respond to The Epoch Times’ request for comment by press time. It declined to comment when reached by Reuters.

On March 15, the Biden administration said (pdf) the CDC was working to help develop “a revised policy framework for when, and under what circumstances, masks should be required in the public transportation corridor.” The statement came as a response to the U.S. Senate having passed a resolution to lift the mask mandate for airplanes and other public transport.

In a separate statement, Delta CEO Ed Bastian said the federal mask mandate and pre-departure testing “no longer fits with the current environment.”

“We appreciate the leadership of the federal government throughout the pandemic,” he said. “Current data and science show it’s time to move from mandates to guidance and personal health choices.”