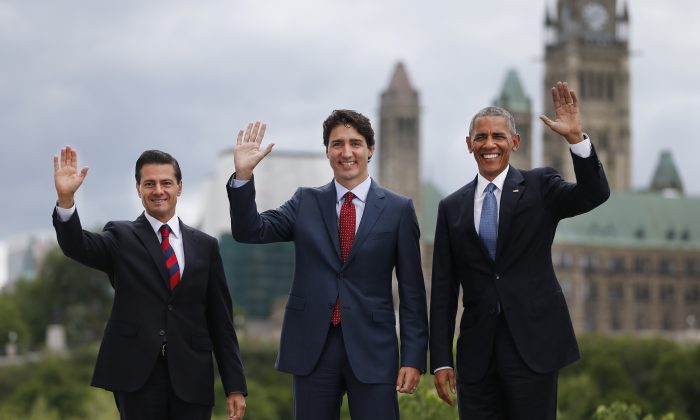 In the “Leaders’ Statement on a North American Climate, Clean Energy, and Environment Partnership” on June 29, President Obama, Canadian Prime Minister Trudeau, and Mexican President Pena Nieto agreed, “to work together to implement the historic Paris Agreement, supporting our goal to limit temperature rise this century to well below 2 degrees Celsius.”

Obama told Canada’s Parliament, “This is the only planet we’ve got, and this may be the last shot we’ve got to save it!”

Underlying such assertions is the unjustified belief that climate science is well understood. According to Obama, Trudeau, and Pena Nieto, a global warming catastrophe awaits if we do not reduce our carbon dioxide emissions by quickly moving away from fossil fuels.

Yet thousands of highly qualified, independent scientists do not share this opinion. Besides their scientific publications, they have made their views known through countless newspaper editorials and open letters. Perhaps the most straight-forward was the Climate Scientists Register of the International Climate Science Coalition (ICSC). In the space of only three days in 2010, 142 climate experts from 22 countries endorsed the following statement:

“We, the undersigned, having assessed the relevant scientific evidence, do not find convincing support for the hypothesis that human emissions of carbon dioxide are causing, or will in the foreseeable future cause, dangerous global warming.”

Among the 64 signatories from the United States were Syun-Ichi Akasofu, professor of physics and founding director of the International Arctic Research Center at the University of Alaska; Robert W. Durrenberger, former Arizona state climatologist, president of the American Association of State Climatologists, and professor emeritus of geography at Arizona State University; William Happer, professor of physics at Princeton University; and Richard S. Lindzen, Alfred P. Sloan professor of meteorology at the Massachusetts Institute of Technology.

Many scientists told ICSC that they agreed with the Register but feared reprisals from their employers or activists if they publicly endorsed the statement.

Such concerns are not unjustified. Two of ICSC’s scientists have had death threats and there have been cases of academic dismissal for espousing politically incorrect views on climate change. In recent months, we have seen attempts by state legislators in California and 16 state attorneys general to criminalize some forms of “climate change denial.” On June 25, the Democratic Platform Drafting Committee unanimously agreed to call for the Department of Justice to investigate corporations who disagree with political correctness on climate science.

Despite such intimidation, debate rages in the scientific community about the causes and consequences of climate change. This is well revealed by the reports of the Nongovernmental International Panel on Climate Change (NIPCC). Citing thousands of peer-reviewed references published in the world’s leading science journals, NIPCC reports demonstrate that today’s climate is not unusual, and the evidence for future climate calamity is weak. The NIPCC explains how the United Nations Intergovernmental Panel on Climate Change (IPCC) has ignored much of the available scientific literature that does not conform to their position on climate change and so often comes to conclusions that do not match the facts.

Statements in support of dangerous anthropogenic global warming (DAGW) by national science academies are also tainted. Not a single one that officially supports the DAGW hypothesis has demonstrated that a majority of its scientist members agree with their academy’s position. Their statements are merely the opinions of the groups’ executives, or small committees appointed by the executives.

Yet last year, the White House tweeted: “97 percent of scientists agree: climate change is real, man-made, and dangerous.” A few days later, Secretary of State John Kerry proclaimed, “97 percent of the world’s scientists tell us this is urgent.”

This is unsubstantiated. There has never been a reputable, worldwide poll of scientists who study the causes of climate change that demonstrates that a majority of them support the DAGW hypothesis.

Even if someday a survey does show a scientific consensus in support of the position held dear by Obama, Trudeau, and Pena Nieto, it would still prove nothing about nature. Scientific ideas are not proven right by a show of hands, political correctness, or intimidation. Were it otherwise, we would still believe that witches cause bad weather, Earth is the center of the universe, and hand-washing is unimportant in public health.

It is not surprising that all three leaders erred in this way. They are relying on the IPCC which often labels its climate science conclusions unequivocal, or statements that cannot be wrong. In support of their position, the U.N. body presents empirical data. But data is always subject to interpretation, so cannot be used to prove truth.

We are best served when our leaders encourage scientists to be fearless intellectual explorers, going wherever their research leads, independent of contemporary fashion. The leaders’ summit on June 29 did the opposite, merely reinforcing a point of view many scientists consider foolish. Citizens of all three countries deserve better.