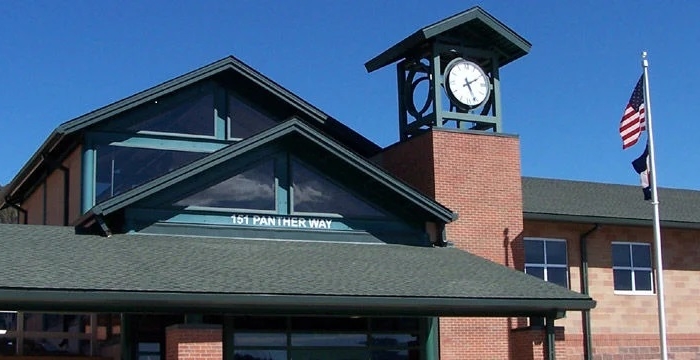 Woodland Park schools in Colorado have been the subject of a bitter school board recall fight. (Courtesy of Woodland Park RE-2 School District website)
Education & Family News

With a looming recall election swirling around the culture wars in a small Colorado town, authorities confirmed their arrest of a recall leader on false complaint charges.

The Woodland Park Police Department confirmed in a press release late last week its arrest of Samantha Peck, one of the leaders of a recall campaign aimed at the Woodland Park School Board.

Peck is charged with a misdemeanor charge of false reporting of an emergency to police and a felony charge of attempting to influence a public servant.

Police say that on July 24, the police department received an emergency call from a person identifying herself as Ms Peck.

The caller said that someone she knew to be the wife of the school board’s vice president appeared to be drunk and getting into a car in a Safeway supermarket parking lot, preparing to drive away with a small child.

Officers responding six minutes later found the driver sober and without a child in the car, police said in the press release.

Lane, a Berkeley Law graduate who worked with the ACLU and Amnesty International in the past said, “we are investigating whether this is or is not a civil rights violation.”

“There are two conflicting versions of what happened,” Lane said. The police department’s version is one, but the other is that Peck “was seriously reporting someone who appeared to be impaired.”

“Ultimately, what we want to do is talk to witnesses and consult body cameras and go from there,” Lane said.

Peck reinforced civil rights analogies in a Facebook post, comparing herself to Martin Luther King and including photos of Mahatma Gandhi and Nelson Mandela behind bars, and Rosa Parks being fingerprinted.

Lane abruptly excused himself from a telephone call, citing a meeting with a judge, before he could be asked how civil rights relate to the Peck case, who in her Facebook photos appears to be white.

Peck is the administrator for the Concerned Parents of Teller County Facebook page, one of the recall’s main online outlets.

Woodland Park police had declined earlier in the week to confirm Peck’s arrest or discuss the matter with The Epoch Times.

David Illingworth is vice president of the Woodland Park RE-2 School District. The police department did not name his wife.

Illingworth was elected to the school board of the small town outside Colorado Springs in November, part of a conservative wave winning four of five school board seats in an election amplifying local schools’ rapidly declining enrolment, and parental dissatisfaction over educational practices.

The new board began rapidly addressing the issues.

They started certification of a charter school the old board had blocked, raised teacher pay, forced out the school superintendent, and ensured notification of parents in advance if their children were to be taught sensitive or age-inappropriate material.

A recall campaign began almost immediately, formally launching a petition drive in early June with 60 days to gather enough signatures to justify a recall election against three board members, including Illingworth, David Rusterholtz, and Suzanne Patterson.

By the deadline, the opponents narrowly met the required threshold of signatures for Illingworth and Patterson but failed for Rusterholtz.

The signatures still need to be certified by the state.

The fourth conservative board member elected last year had already resigned after coming under severe personal attack at board meetings.

A Colorado columnist decried the recall campaign’s apparent use of a tactic called “swatting” coming out of the video game world.

To take out a rival, a player falsely reports him to the police for something severe enough to justify sending a SWAT team.

“The innocent victim finds himself surrounded by police officers with guns drawn. It wastes officers’ time and resources and puts the victim, and the officers, in danger,” wrote Krista Kafer of The Denver Post.

“When an irresponsible teen whose prefrontal cortex is still developing engages in this kind of delinquent behavior, some consideration should be made for his lack of maturity.

“When middle-aged women do it to harass political opponents, no such consideration should be made. Throw the book at them. They aren’t just harming their victims, but democracy itself.”

Kafer cited another case of it in the Denver suburbs, where the partner of a former police chief anonymously reported a city councilwoman for child abuse.

The councilwoman, who was exonerated, had been critical of the police chief, who later resigned. The partner was charged with making a false complaint.