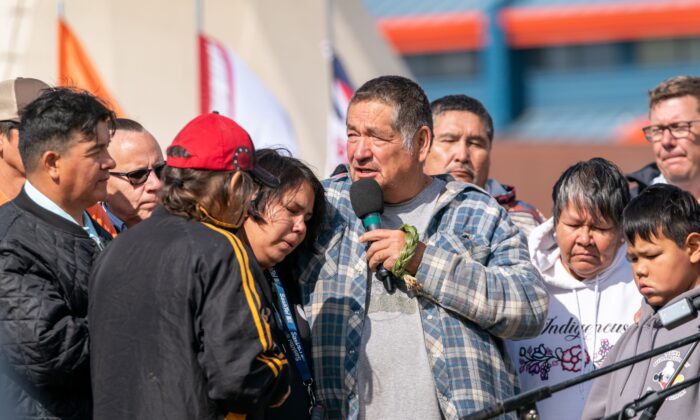 There was a heartfelt plea for forgiveness and healing at a news conference on the James Smith Cree Nation on Thursday.

Darryl Burns, whose sister Gloria Burns was killed in the stabbing rampage that left 10 people dead on Sunday Sept. 4, said his sister died trying to help others.

Gloria Burns was a member of the community response team at James Smith Cree Nation.

“She went alone that morning because a friend needed her help,” said Burns. “And that’s the kind of person my sister was, whoever needed help, she would go.”

Burns also singled out the wife of Damien Sanderson. Damien Sanderson, 31, was found dead Monday from wounds police do not believe were self inflicted. The RCMP said Wednesday he remains a suspect in the attacks.

“Her husband is accused of killing my sister–our family is here to forgive, this woman shouldn’t have to bear that kind of guilt and shame and responsibility,” he said. “I told her part of forgiveness is accepting the forgiveness of our community–our community wants to forgive her. … That is in our DNA.”

‘Fight Against Drugs and Alcohol’

Burns was also among a number of people who called for more help in dealing with addictions.

“We asked for treatment centres, so things wouldn’t happen like this … we don’t wish this upon anybody,” the chief said.

“My nephews lost their father–my best friend. … My family on the left lost their sister–these acts of violence have to stop and they have to stop now,” he said, adding “We’ve got to protect our community, fight against drugs and alcohol.”

Chief Robert Head of the Peter Chapman Band said “the worst of it” is now over, and the healing can begin.

“That’s going to take a long time, and we’re going to need a lot of support,” he said.

“The criminal system again has failed the indigenous community,” said Grand Chief Brian Hardlotte of the Prince Albert Grand Council. “This incident sheds light on the fractured system where the Parole Board has to be more transparent, and make some fundamental changes in consultation with First Nations peoples.”

After the rampage, news came out that one of the suspects, 32-year-old Myles Sanderson, who had 59 previous criminal convictions, had been released by the Parole Board because he was viewed as a manageable risk.

Several others asked that tribal police forces be implemented to make a difference.

“We will get there one day,” said Chief Bobby Cameron of the Federation of Sovereign Indigenous Nations.

For his part, Saskatchewan Premier Scott Moe said the whole country is mourning with James Smith.

“The people from corner to corner of this province, our condolences, our love, our support and our prayers,” Moe said. “All of Canada is with you during this very very difficult time.”

Moe said the province is willing to explore options around more indigenous control of justice, but added it would have to be a collaborative effort, involving other levels of government.

Chief Burns and several others thanked the RCMP and other first responders for the many long hours spent hunting for Sanderson, and bringing the case to a close.

The tragedy began Sunday morning, with calls from James Smith Cree Nation about a series of stabbings. Shortly after 7 a.m., the RCMP issued an alert about two suspects, and warned people in nearby communities to take shelter.

Police were hunting for Damien Sanderson 31, and his brother Myles Sanderson, 32.

The stabbing spree left 10 people dead and 18 injured at 13 different locations, mostly on James Smith Cree Nation, but also in the nearby village of Weldon.

On Monday RCMP announced Damien Sanderson had been found dead on James Smith Cree Nation, with wounds not believed to be self-inflicted. But the hunt continued for Myles Sanderson.

On Wednesday Sanderson was spotted during a break-in at a home near Weldon. He fled in a stolen truck, and around 3:30 p.m. Wednesday afternoon the truck was forced into the ditch by RCMP, on Highway 11 near the town of Rosthern.

“All live saving measures that we’re capable of were taken at that point in time,” Blackmore said.