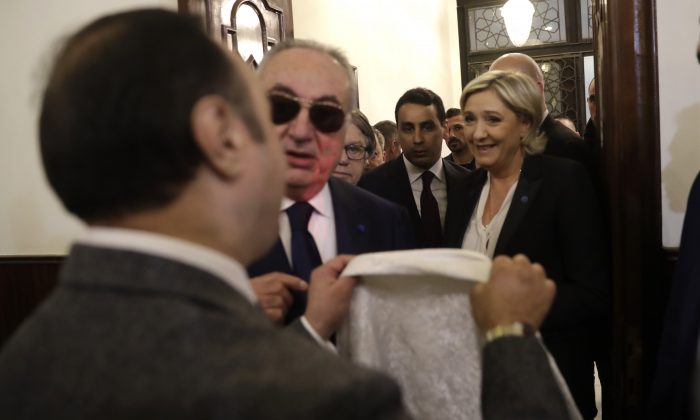 An aide of Lebanon's Grand Mufti Sheikh Abdel-Latif Derian (L) gives a head scarf to French conservative presidential candidate Marine Le Pen (R) to wear during her meeting with the Mufti, which Le Pen refused, upon her arrival at Dar al-Fatwa the headquarters of the Sunni Mufti, in Beirut, Lebanon on Feb. 21, 2017. (AP Photo/Hussein Malla)
International

BEIRUT—France’s right-wing presidential candidate Marine Le Pen refused to don a headscarf for a meeting with Lebanon’s top Sunni Muslim cleric on Tuesday, walking away from the scheduled appointment after a brief encounter at the entrance.

Le Pen, who is on a three-day visit to Lebanon this week and has met senior officials, was to meet with the country’s grand mufti, Sheikh Abdel-Latif Derian.

Shortly after she arrived at his office, one of his aides handed her a white headscarf to put on. Following a discussion with his aides that lasted few minutes, she refused and returned to her car.

Le Pen has been raising her international profile and pressing her pro-Christian stance with her visit to Lebanon, a former French protectorate.

On Monday, she met with President Michel Aoun and Prime Minister Saad Hariri. She said Syrian President Bashar Assad was “the most reassuring solution for France,” adding that the best way to protect minority Christians is to “eradicate” the ISIS terrorist group preying on them—not turn them into refugees.

Some Lebanese officials, including Hariri, a Sunni, have taken umbrage at what they see as her stigmatization of Muslims, who her followers claim are changing the Christian face of France.

After walking away from the meeting with the grand mufti, Le Pen said she had previously told the cleric’s office that she would not wear a headscarf.

“They didn’t cancel the meeting, so I thought they would accept the fact that I wouldn’t wear one,” she said. “They tried to impose it upon me.”

The office of Lebanon’s mufti issued a statement saying that Le Pen was told in advance through one of her aides that she would have to put on a headscarf during the meeting with the mufti.

“This is the protocol” at the mufti’s office, the statement said. It said the mufti’s aides tried to give her the headscarf and that Le Pen refused to take it.

“The mufti’s office regrets this inappropriate behavior in such meetings,” the statement said.

Le Pen said she had met in the past with Egypt’s Grand Sheikh of Al-Azhar, the head of the Sunni world’s most prestigious learning institute, without wearing a headscarf. Photos of Le Pen with Ahmed al-Tayeb in 2015 in Cairo show her with the cleric with her hair uncovered.

Le Pen’s refusal on Tuesday to don a headscarf would be in line with her strong support for French secularism, and a proposal in her presidential platform. French law bans headscarves in the public service and for high school pupils.

Le Pen’s proposal aims to extend a 2004 law banning headscarves and other “ostentatious” religious symbols in classrooms to all public spaces. While the 2004 law covers all religions, it is aimed at Muslims.