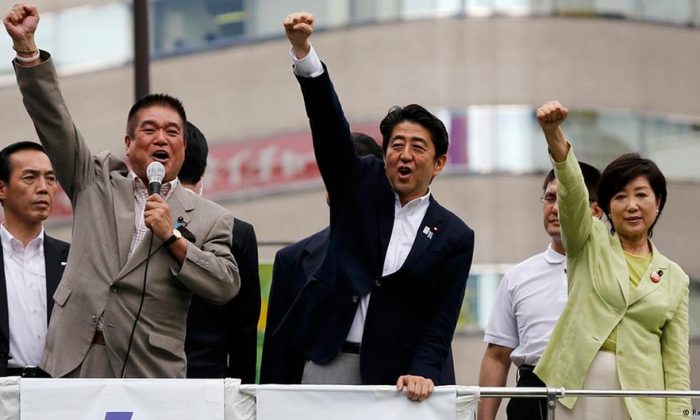 In a nationally televised address, Prime Minister Shinzo Abe said Thursday that the government should change the interpretation of the constitution to permit the use of “collective self-defense.” That would allow Japan’s Self-Defense Forces to aid its allies even if Japan itself isn’t directly attacked.  A number of American media outlets have chimed in on the topic, and provided their opinion on the matter. But as Abe Administration begins the enormous push for reinterpretation of Article 9, the relationship between the ruling party — Abe’s Liberal Democratic Party (LDP) — and their junior coalition partner — New Komeito — will be tested.

New Komeito, backed by the Buddhist organization Soka Gakkai, believes that the peaceful and pacifist nature of the Constitution must be upheld and protected. They also fervently believe in Japan’s three non-nuclear principles of not producing, possessing, or allowing nuclear weapons on Japanese territory – and the party is even hosting an international summit on eliminating nuclear weapons in 2015.

The Abe administration will try to change the mind of New Komeito leadership in the coming months.  After receiving a report for the Advisory Panel on Reconstruction of the Legal Basis for Security, Abe announced that his Cabinet will approve the necessary legal measures to allow Japan to exercise their right to collective self-defense.  The political process to reinterpreting Article 9 requires talks between ruling coalition parties.  And talks between the LDP and New Komeito may begin as soon as May 20.

Abe is trying to skip this procedure all together by simply reinterpreting the constitution, which Asahi Shimbun looks at as effectively putting the Constitution under the Cabinet’s control.  Abe’s “disregard” for Constitutional due process is another issue that New Komeito – and other coalition partners –look at distastefully.

New Komeito faces a major dilemma.  If it intends to keep its title as the “party of peace,” it will have to leave its ruling coalition with the LDP. This would be bad news for the LDP, because losing the coalition means losing their super majority in the Diet (the coveted two-thirds majority in the Upper and Lower House).  By losing their super majority, it would be impossible for the Abe administration to pass much needed structural reforms as part of the third arrow of Abenomics.  However, Natsuo Yamaguchi, the leader of New Komeito, has alluded that he does not want to leave the ruling coalition.

Using the argument of rising tension in East Asia, Abe might be able to persuade New Komeito to agree to a reinterpretation of the Constitution. They had been averse to free trade and other reforms in the past, but were persuaded otherwise by Abe.

As a concession to New Komeito, Abe agreed that the two parties would discuss the so-called “gray zone” situation concerning the deployment of self-defense troops. These gray zone situations are armed incidents that fall short of full-scale military attacks by sovereign nations, like armed groups disguised as fishermen taking control of a remote Japanese island and foreign submarines refusing to leave Japanese territorial waters despite repeated warnings. New Komeito leadership wants to place clarifying laws that have no provisions regarding SDF deployment in gray zone situations. Given China’s muscle-flexing over the Senkaku Islands, New Komeito wants to make sure that they don’t accidently end up in an armed conflict with their neighbor to the west.

So who will Abe have to be convincing? Negotiations within the ruling coalition will have five participants from each party, including New Komeito Secretary-General Yoshihisa Inoue and deputy chief Kazuo Kitagawa. New Komeito’s Akihiro Ota, the Minister of Land, Infrastructure, Transport and Tourism would also have to sign off on any document that requires Cabinet approval.

Whether Abe will be able to convince New Komeito to agreeing to Constitutional reinterpretation without straining their relationship will be a serious undertaking. But with tension rising in East Asia, Abe might find that he has the necessary support and political capital to make New Komeito change their long-standing title as “party of peace.”