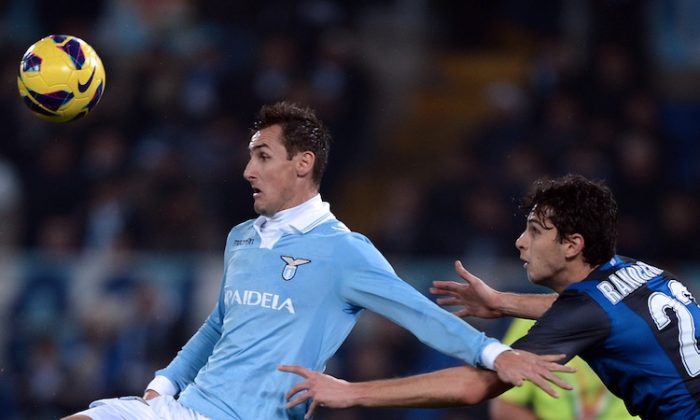 After hitting the goal post twice, the 34-year-old Klose finally nailed the winner for Lazio who caught Napoli in third place.

The match picked up in the latter part of the second half in a game with a 65-minute stalemate. The teams studied each other for most of the match, fearful of the opponent’s counterattacks, strong in defense, but half-hearted in attack.

It was only when it appeared the players were fatiguing that spaces opened up and the game began to turn.

“We have played a great match,” Lazio midfielder Stefano Mauro said in an interview with Sky. “At home it’s often so, we can play well, intensely and this way we can hurt everyone.

“Yet we must learn to play like that with anyone, not only with the big teams.”

Claudio Lotito, Lazio’s president, feels the same way. “Today we have shown determination. We pressed on our opponents for almost all the 90 minutes; it would have been a crime not to win the three points.”

Vladimir Petkovic’s team took advantage of technical superiority on the wings, with fast exchanges between Senad Lulic and Stefan Radu on the left and the incisive penetration of Abdoulay Konko on the right.

On the Inter side, only Fredy Guarin shined. The Colombian wasn’t helped by strikers Antonio Cassano and Diego Milito, who were both very quiet.

“We absolutely didn’t deserved to lose,” Stramaccioni said. “But Klose has scored a big goal and unlocked the match.

“Maybe we missed something in the first half, but also it’s Lazio’s merit. In the second half, we came back on the field with a different spirit; mentally, we played a great team’s match.

“Klose is a champion and has scored a great goal. The result on the field is this, and we accept it.”

Klose had a solid first half with runs in the box that sent shivers through Lazio fans at the Olimpico, which was full of fans despite the humid and rainy weather.

But even in the second half, the game was slow to take off, and appeared often confused in the midfield, with inaccurate passes and action broken by frequent fouls.

It was when Guarin hit the post in the 67th minute that the match unblocked. The Colombian hit the post to the left of Lazio goalkeeper Federico Marchetti with a low shot from outside the box.

For several minutes thereafter Stramaccioni’s team took courage after an hour of fearful defensive play that was leaving the run of the match to the hosts.

Only five minutes later, Cassano, from the edge of box, hit the second post for Inter. Yuto Nagatomo hit the rebound shot on goal and Marchetti yielded a corner—a double attack that definitively turned the game on.

From the corner, Rodrigo Palacio, at the top right corner of the box fired just wide of the far post.

The star of the evening, Klose, broke onto the stage in the 80th minute. He was left alone and missed a golden chance a few yards away from goalkeeper Samir Handanovic, failing to control the precise cross by Alvaro Gonzalez.

He didn’t make a mistake, however, two minutes later, when he cut quickly towards the opening, sensing the goal and masterfully sealed it at the far post. It was Klose’s tenth goal of the year.

Inter did not give up, looking for a draw until the end, and despite four minutes of injury time, the dribbling skills of Cassano, and the amazing fitness of Guarin could not change the outcome.

Lazio was safe in defense with the two immovable objects in central defense Giuseppe Biava and Michaël Ciani. The club from Rome was explosive on the wings when they needed to be and pragmatic in the attack with their veteran German striker Miro Klose.

With Napoli giving up two late goals to lose 3–2 at home to lowly Bologna on Sunday, Lazio finds itself tied for third place, a point behind Inter.