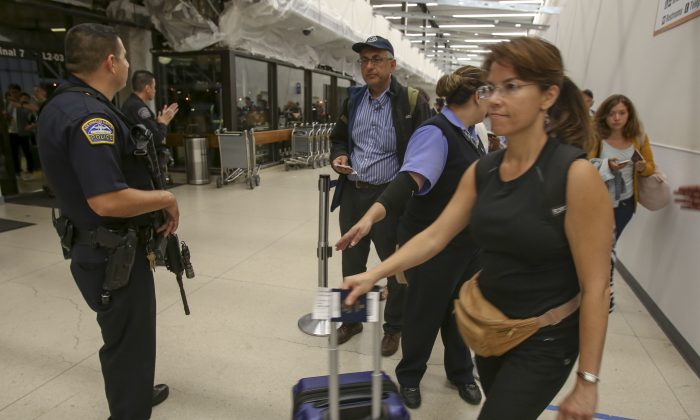 LOS ANGELES—A terminal at Los Angeles International Airport was temporarily evacuated and 18 flights were delayed after an arrest led to a security breach Sunday morning.

Some travelers moved past a security area without being screened when officers asked them to move inside Terminal 3 as they pulled over a driver in a stolen vehicle outside the terminal, airport police Officer Rob Pedregon said.

He said about 15 people went through an emergency exit and onto the tarmac. Police quickly moved those people back into the airport, and the terminal was evacuated as a precaution, Pedregon said.

Police searched the terminal with bomb-sniffing dogs and, once the area was cleared, as many as 2,000 travelers had to be rescreened, authorities said. Nine arriving and nine departing flights were delayed.

A 35-year-old man was arrested on suspicion of possessing a stolen car and narcotics. He was identified as Larry McKenney of Humboldt, Texas. Four others who were in or near the car were questioned and released, police said.

Los Angeles Mayor Eric Garcetti said in a statement that recent events around the world “have caused travelers everywhere to have a heightened level of concern for their safety.”

“The millions of people whose journeys begin, end, or pass through LAX should know that it has the finest, most prepared airport police force and federal security personnel in the nation — and that their safety and protection will always be our number-one priority,” he said.

The evacuation came a week after 911 calls falsely reporting gunshots at LAX sent panicked travelers running onto streets and the tarmac. A search uncovered no evidence of a gunman or shots fired. Officials said loud noises spurred the 911 calls, and police were still investigating their source.