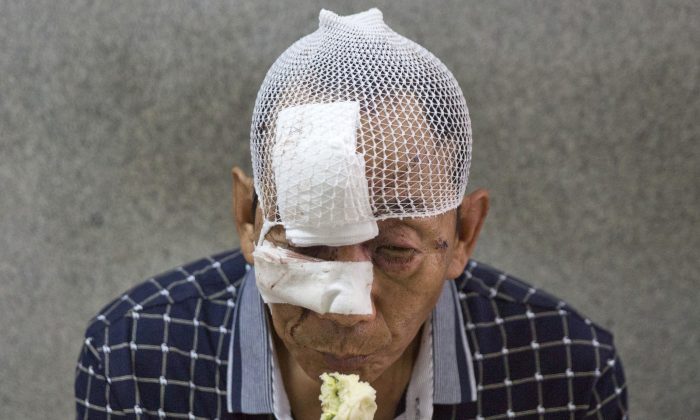 A man with his wounds bandaged eats a bun in a hospital receiving victims of an explosion in northeastern China's Tianjin municipality on Thursday, Aug. 13, 2015. (AP Photo/Ng Han Guan)
China

After two massive explosions that laid waste to a docking facility in the Chinese port city of Tianjin on Aug. 12, there is still no official word on what caused the disaster.

What’s known is that the blast occurred at warehouse of hazardous chemicals owned by Tianjin Dongjiang Port Ruihai International Logistics, a company that specializes in storing and transferring dangerous goods. The port is the 10th largest in the world and China’s seventh largest.

Chinese officials, who are trying to keep a tight rein over information about the accident, said they are investigating.

Given China’s well-documented track record for lax safety standards in handling hazardous goods it seems likely this was a contributing cause.

From what he’s seen, he said the accident in Tianjin isn’t shocking.

“It doesn’t surprise me because safety oversight in China is really lax.” The lack of oversight, he said, extends to those carrying out packing and shipping.

Richards, who played a major role in developing the current version of the International Maritime Dangerous Goods Code, argued, “Anything can be shipped and stored safely as long as appropriate standards are in place,” but those standards have to be followed.

“You have unscrupulous shippers [in China] that many times do not follow the rules in place internationally,” he said, adding that in 95 percent of cases where there’s an incident, it comes down to people not following existing rules.

European partners have also chastised China for its poor safety and oversight practices.

According to the Maritime Transport Working Group, which was established in 2000 to represent European maritime transport interests in China, sea transport of dangerous cargo from and within China is an ongoing concern.

“Many cases of fraudulent declarations of dangerous cargo from China have been reported, resulting in frequent fires and the increased risk of casualties, vessel damage, and heavy pollution. For instance, cargo declared as plastic toys could in fact be fireworks; loading these containers close to the engine room could be catastrophic,” states a 2012 report from the group.

So far, the death toll reported by the authorities stands 50 people with dozens missing and 700 injured.

However, Chinese commenting on social media are widely speculating that the number should be much higher. First, they know that it’s standard practice for the state to downplay the scale of any disaster whether it be floods, earthquakes, epidemics, or high-speed trainwrecks.

Moreover, given descriptions of the impact of the blast, the official number seems suspiciously low. The Associated Press reporeds that an entire workers’ dormitory was destroyed (most workers would have been sleeping at midnight), shipping containers were tossed like toy blocks, 1,000 new cars were turned into scorched metal husks, and windows were shattered for miles.

Hong Kong-based Apple Daily ran an exclusive report citing an unnamed police officer who said of the 120 firefighters and police who went into the disaster area, he only knows of four who came out.

Social media users have complained about posts being deleted.

Despite official silence about a possible cause, state media reported that senior management at Ruihai International had already been detained and that Chinese leader Xi Jinping demanded severe punishment for anyone found responsible for the explosions.

Authorities have cordoned off about a mile around the area, keeping reporters and bystanders away.

In a sign of sensitivity over how the incident is portrayed, state broadcaster CCTV quickly cut away from a live press conference in Tianjin when the head of the municipality’s Environmental Protection Bureau, Wen Wurui, hesitated to answer a reporter’s question about whether the chemicals at the warehouse had been stored far enough away from residences.

Tianjin Internet Police posted a message online warning social media users to keep to official reports about the numbers of dead and injured, saying that there would be “zero tolerance for creating rumors.”

Staff member Frank Fang and The Associated Press contributed to this report.