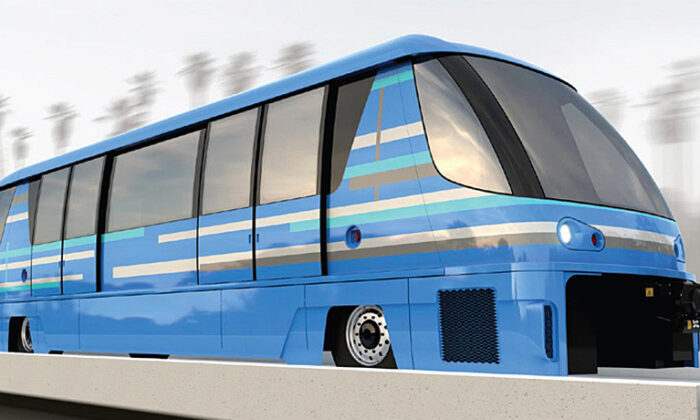 A concept graphic of the Automated People Mover train coming to Los Angeles International Airport in 2023. (Courtesy of the City of Los Angeles)
Southern California

LOS ANGELES—The Los Angeles International Airport (LAX) introduced its first Automated People Mover train car Aug. 2, marking a step toward the future of how people will be able to travel to and from the airport.

The driverless train system is the centerpiece of LAX’s Landside Access Modernization Program, featuring six stations that include connections to the Metro light rail system. The goal is to reduce the number of vehicles traveling into the airport’s Central Terminal Area.

“The Automated People Mover will be so much more than another way to get to LAX—it’s the piece of the puzzle that will curb the congestion that has been plaguing our airport for decades,” Mayor Eric Garcetti said. “As we welcome the first car that will whisk travelers to renovated terminals, parking structures, Metro rail, and a new rental car facility, it’s clear that a completely reimagined LAX is on the horizon.”

The system is expected to be operational next year.

On Tuesday, local officials, including Rep. Maxine Waters (D-Calif.) gathered at the airport’s Maintenance and Storage Facility for the celebratory event.

“I am excited and proud to see the first train cars delivered for LAX’s Automated People Mover,” Waters said. “Construction has been moving at a fast pace and when complete will enable airline passengers to reach their terminals from anywhere near a Metro light rail line at a fraction of the current cost and without contributing to local traffic and vehicle emissions.”

“Through innovation and a major investment in our future, LAX is setting a high bar with this transformational train system that will improve access and connectivity for travelers while reducing congestion and our carbon footprint,” Bonin said.

The first train car traveled from the Alstom factory in Pittsburgh, arriving at LAX in June, with three more following. There will be 44 train cars coming to the airport.

During peak hours, trains are expected to arrive at stations every two minutes and take 10 minutes to go end-to-end.

Each train car features 12 seats with large windows, ample handholds, and easy access to luggage, according to officials.