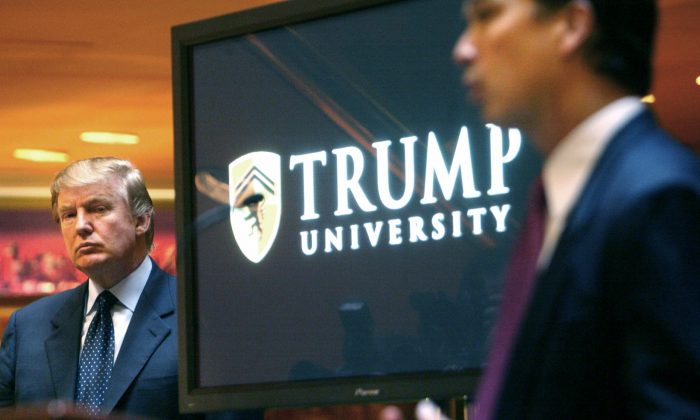 FILE- In this May 23, 2005, file photo, real estate mogul and Reality TV star, now Republican presidential candidate Donald Trump listens at left as Michael Sexton introduces him at a news conference in New York where he announced the establishment of Trump University. Among the people with serious financial problems who taught for Trump University is a case that crossed international borders, an Ontario couple who securities regulators sanctioned over a multimillion-dollar fraud, according to documents reviewed through a joint investigation by The Associated Press and The Canadian Press. (AP Photo/Bebeto Matthews, File)
Politics

Donald Trump’s attorneys filed a motion to delay until after the presidential inauguration a class-action fraud lawsuit involving the president-elect and his now-defunct Trump University.

In the motion filed Saturday evening in San Diego federal court, Trump’s lawyer Daniel Petrocelli argues that the extra months would give both sides time to possibly reach a settlement.

Petrocelli lays out a detailed plan that would postpone the trial until sometime soon after the Jan. 20 inauguration to allow the president-elect to focus his time and energy on the transition to the White House, the San Diego Union-Tribune reported ( http://bit.ly/2fNK97O).

The lawsuit alleging Trump University failed on its promise to teach success in real estate is scheduled to begin Nov. 28.

The motion also requests that Trump be excused from having to testify live or in person. Instead, his lawyers argue he should be allowed to be questioned by both sides in a videotaped deposition for trial purposes either shortly before Jan. 20 — when his transition duties would be nearly complete — or at a later time. That video would then be played at trial.

Petrocelli asks that the specific date and location of the recording would be kept secret, until trial, the newspaper said.

In addition, the video testimony would be used not only in this case, but in a similar Trump University lawsuit also in San Diego that is not as close to trial — ensuring Trump won’t have to testify twice.

“The videotaped testimony will ensure no additional delay of trial based on future scheduling unpredictability,” Petrocelli wrote.

If U.S. District Judge Gonzalo Curiel denies the motion, Petrocelli requests an immediate stay on the proceedings so he can appeal to a higher court.

Curiel was informed Thursday during a hearing in the case that Trump would be seeking a continuance. The judge didn’t signal how he would rule on the request for a trial delay, but he encouraged efforts to settle. He has been reluctant to postpone the 6 ?-year-old case any longer.

The lawsuit filed in 2010 on behalf of former customers says Trump University gave seminars and classes across the country under the guise of being an accredited school, which it wasn’t, and pressured people to spend up to $35,000 on mentorships from Trump’s “hand-picked” instructors.

The claims largely mirror another class-action complaint in San Diego and a lawsuit in New York.