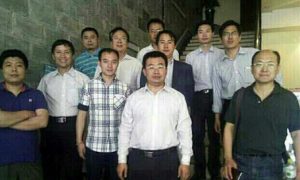 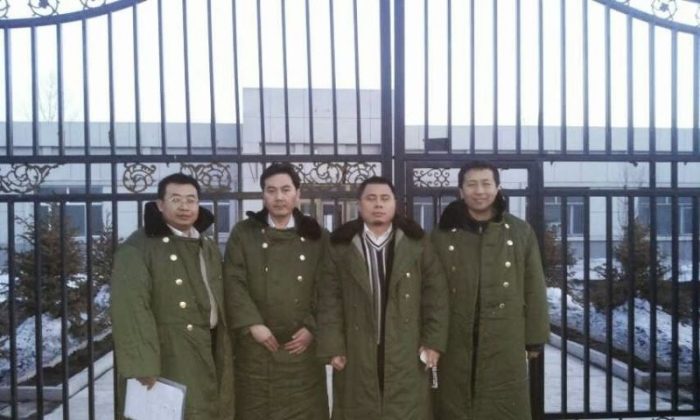 Mainland human rights lawyers (L–R) Jiang Tianyong, Tang Jitian, Wang Cheng, and Zhang Junjie stand outside a brainwashing center before being arrested. They are still in custody. (Courtesy of the subjects)
China

Lawyers Jiang Tianyong, Tang Jitian, Wang Cheng, and Zhang Junjie were detained by security officers after being followed to their hotel, and are now in custody in Jiamusi, Heilongjiang Province. Several relatives of the imprisoned Falun Gong practitioners were detained with the lawyers.

Two of the lawyers, Jiang Tianyong and Tang Jitian, were given 15-day administrative detentions (detained with no trial or hearing) for “using cult activities to endanger society.” It is unclear where they will be held.

After the persecution of Falun Gong began in 1999, Chinese authorities attacked it with negative labels in order to incite hatred. Throughout the 1990s the practice had become extremely popular, gaining 70 million practitioners with its blend of slow-motion exercises and the moral principles of truthfulness, compassion, and forbearance.

The four lawyers were taken away by over 10 security officers the day before they were intending to bring suit against the Jiansanjiang Procuratorate for the illegal detention of the practitioners in Qinglongshan brainwashing center, a black jail, which is identified as the Heilongjiang Land Reclamation Bureau. This was the third time that the lawyers and family members had gone to the brainwashing center, trying to bring about the release of the practitioners. The extralegal facility operated with no oversight, and was located behind the local Public Security Bureau.

Responding to the kidnapping of the lawyers, over 100 rights lawyers and hundreds of concerned citizens released a statement condemning their confinement, which is in circulation on the Internet.

Human rights defense lawyers who handle Falun Gong cases are being targeted in the same way as the adherents they seek to defend, according to lawyer Li Fangping. “This is a new development and a new challenge,” he said, according to a blog post by Joshua Rosenzweig, a human rights researcher based in Hong Kong. Li said that several lawyers traveled to Jiamusi to intercede with public security officials there.

This is not the first time that the rights lawyers have attempted to free Falun Gong practitioners held in brainwashing centers. Last year a group of lawyers, including Jiang and Tang, were beaten at the Er’ehu Legal Education Center in Sichuan Province and were detained overnight.

“We just arrived at the legal education center and didn’t expect them to be so aggressive and violent. They leapt up and starting hitting us. Later they took us to the local police lockup—there were a lot of plainclothes police and domestic security officers there. The entire time they were extremely violent;” Jiang told Epoch Times in an interview.

Jiang Tianyong, a Christian, has specialized in religious persecution cases, and has been detained, blocked from traveling, and disbarred from practicing law in China. He testified before a U.S. House of Representatives Human Rights Commission hearing in 2009 on the “level of harassment, suppression, and persecution, because we serve as defense counsels in cases of safeguarding the freedom of religious belief.”

Tang Jitian has also been detained and lost his license to practice for his work with Falun Gong practitioners, the melamine-tainted milk victims, and other human rights cases. In 2011, he was held and tortured, then placed under house arrest.

Wang Cheng was instrumental in the launch of an online signature campaign calling on Beijing to ratify the United Nations International Covenant on Civil and Political Rights. He too has been detained for his advocacy activities.

Shandong-based Zhang Junjie worked with Jiang Tianyong on the case of activist Xue Mingkai, whose father died under suspicious circumstances.

“This naked frame-up is a serious abuse of power and violation of the law—a serious rule-of-law disaster that tramples on human rights,” accused the authors of the statement of condemnation.