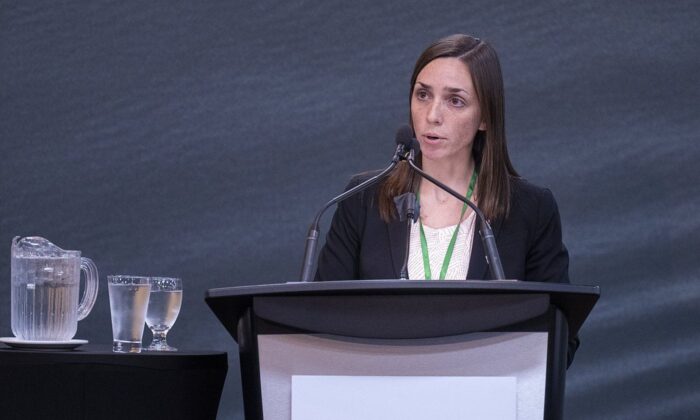 Sandra McCulloch, a lawyer with Patterson Law, representing many of the families of victims of the 2020 Nova Scotia mass shooting, addresses the Mass Casualty Commission inquiry into the killings in rural Nova Scotia on April 18/19, 2020, in Truro, N.S., on Sept. 20, 2022. (The Canadian Press/Andrew Vaughan)
Canada

The RCMP must be held accountable for mistakes the police force made in April 2020 when it failed to stop a gunman in Nova Scotia from killing 22 people during a 13-hour rampage, an inquiry into the massacre heard Tuesday.

Lawyers representing most of the victims presented their final oral submissions to the commission of inquiry, which started public hearings in February and is expected to submit a final report with recommendations to improve public safety by March 31.

“Now is not the time to shy away from assigning accountability for the fear that it might have the appearance of blame,” said Sandra McCulloch, whose firm represents the majority of the victims’ families. “Our clients deserve a frank and honest assessment of what went wrong.”

The federal-provincial inquiry cannot lay blame or find criminal or civil liability. Instead, it is a fact-finding body that will issue non-binding recommendations to prevent similar tragedies.

McCulloch said the evidentiary record shows the RCMP were not prepared for what happened on the night of April 18, 2020, when a man disguised as a Mountie—and driving a car that looked exactly like an RCMP cruiser—started killing neighbours and strangers in rural Portapique, N.S.

The inquiry has heard that Gabriel Wortman, a 51-year-old denture-maker from Dartmouth, N.S., evaded police and killed another nine people the next day before he was shot dead by two Mounties who spotted him at a gas station north of Halifax.

“The (RCMP) had not readied itself and its members for such a large-scale event and we observed a widespread inability to think outside the box, with tragic consequences,” McCulloch said.

Lawyer Tara Miller, whose firm represents a relative of victim Kristen Beaton, who was pregnant when she was killed, said the public’s trust in law enforcement has been shaken by what happened in northern and central Nova Scotia.

“The deaths of 22 people and Baby Beaton came at the hands of a monster,” Miller said.

“When such evil reigns, we turn to those trusted with public safety to protect us. However, in this case, a cascade of failures, errors and missteps by the RCMP fundamentally impacted the trust Nova Scotians have in the RCMP to maintain public safety.”

McCulloch said the Mounties failed to recognize troubling events before the killings that should have flagged Wortman as a person of concern. Among other things, the inquiry heard he had a long history of smuggling drugs and alcohol from the United States and had assaulted a teenager in 2001, threatened to kill his parents 2010 and told someone that he wanted to “kill a cop” in 2011.

The inquiry also heard from a woman who said she was told by an eyewitness that Wortman had choked his spouse in 2013. Brenda Forbes also testified that she spoke to two officers about the assault, but nothing was done.

“We submit that the RCMP … had the perpetrator on its radar, and yet this radar appears to have been turned off again and again,” McCulloch said.

“Whether this was because he was a wealthy white man who cleverly presented as pro-police … or whether the RCMP … just didn’t take the time to note and actually investigate these red flags, the result is the same. The perpetrator was subject to no real scrutiny and was left free to devastate our communities.”

McCulloch also suggested that when the killing started in Portapique, the Mounties who responded were inadequately trained, poorly supervised and lacked the tools necessary to track a killer in the dark.

The lawyer pointed to what she described as multiple communication failures within the RCMP’s “disorganized command structure” and with the public.

The inquiry has heard the RCMP used Twitter to warn the public that a killer was on the loose about 10 hours after the shooting started in Portapique. As well, the inquiry heard evidence that the Mounties initially rejected using the Alert Ready system to send intrusive warnings to most radios, TVs and cellphones, even though they had been encouraged to use the system years earlier.

On another front, Miller cited evidence showing the Mounties had obtained a photo of the killer’s replica police car at 8 a.m. on April 19, 2020, but it took them more than two hours to relay that critical information on Twitter.

“By 9:37 a.m., (Kristen Beaton) was aware of the perpetrator’s name, had a picture of him and knew that he was the suspect in the Portapique shooting,” Miller said. “What she was not aware of and did not find on social media was that the perpetrator was driving a (replica) RCMP vehicle.”

Beaton was fatally shot just after 10 a.m. as she sat in her parked car in Debert, N.S. The tweet about the replica car was sent at 10:17 a.m.

Lawyer Josh Bryson, who represents relatives of victims Peter and Joy Bond, said the RCMP’s chain of command was “unwieldy” because decisions regarding additional resources required multiple layers of bureaucracy.

“It’s not responsive and it’s not timely,” he said, adding that his clients believe it took too long for the Mounties to set up a so-called critical incident command structure.

As well, Bryson noted that an off-duty RCMP officer, Sgt. Andy O’Brien, was issuing orders via two-way radio on the night of April 18, 2020, even though “he was not in a position to make decisions” and had consumed four to five rum drinks earlier that evening.

“From a lay-person’s perspective that sounds preposterous,” Bryson said. “If I showed up today and told you I had four to five drinks of alcohol before giving my submissions, you’d have grave concern.”

Bryson also pointed to testimony confirming the RCMP failed to secure crime scenes in Portapique, which explains why the bodies of the Bonds were not found for 18 hours.

Meanwhile, McCulloch said her clients have drawn attention to the Mounties’ apparent rejection of multiple witness statements that accurately described the killer’s vehicle. As well, she suggested the RCMP have refused to acknowledge key shortcomings in their response, including evidence showing two of its officers opened fire on an emergency official when they mistook him for the killer.

She also cited failures to collect evidence, delays in notifying the victims’ next of kin and protests that erupted when certain RCMP officers called to testify before the inquiry were exempted from direct cross-examination.

As well, some of the decisions taken by the three commissioners overseeing the inquiry have left some of the victims’ relatives feeling marginalized, she said.

“For many, their faith in this process is dwindling if not lost,” McCulloch said. “They need to know that they’ve been heard.”