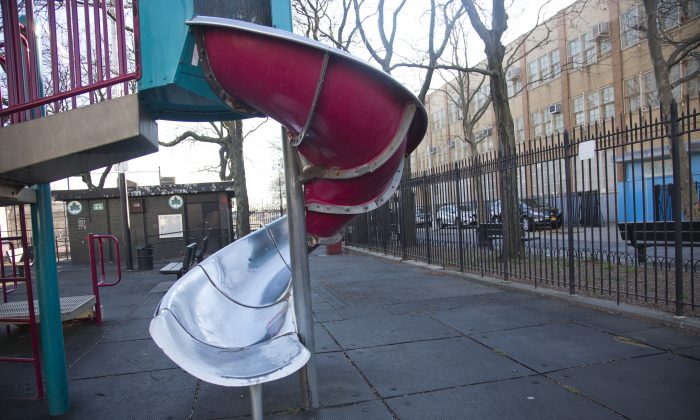 This Monday, Jan. 11, 2016 photo shows Osborn playground in the Brownsville section of Brooklyn, N.Y., the site of an alleged gang rape, in New York. Four teenagers were in custody on Monday in connection with the incident, and a fifth was being sought. (AP Photo/Bebeto Matthews)
Crime and Incidents

NEW YORK—A lawyer for one of five teenagers accused of raping a young woman at a playground said Tuesday he has seen video evidence that shows the woman “laughing and smiling” during what she later called an attack.

Four of the teens denied the allegations in court Tuesday night as investigators continued to untangle the details of the case, including a claim by some of the youths that the encounter was consensual.

“The demeanor of the victim matters . and they know it,” Montgomery said. “The grand jury should have an opportunity to view that video.”

Murray appeared in court Tuesday with Shaquell Cooper and Ethan Phillip, both 15, and Onandi Brown, who’s 17, to face rape, criminal sex act, sexual abuse and other charges. Attorneys for each of them said they denied the allegations.

The fifth teen suspect, Travis Beckford, 17, was found at school following several days of searching, authorities said. He was arrested on charges of rape, criminal sex act and sex abuse. Information on his attorney was not immediately available.

Denzel Murray, 14; Ethan Phillip, 15 and Shaquell Cooper, 15 are suspects in the gang rape of an 18-year-old. pic.twitter.com/0pbVa5Mxrg

Authorities were told the attack began Thursday night after the 18-year-old woman and her 39-year-old father decided to drink beer together near a handball court at a Brooklyn playground that area residents say usually is quiet and empty at night. The two were drunk, officials said.

The woman told investigators that a group of teenagers approached them in the park and ordered the father to leave. When he returned moments later and hurled a bottle at the teens, one teen pulled out a handgun and chased him away, according to investigators.

“She had physical injuries at the time,” he said. “She was traumatized.”

The father said he wandered around for several minutes in a futile attempt to get help, according to authorities. He said he went into a store but a merchant refused to let him use a telephone, they said. He then flagged down two police officers and told them his daughter was maybe being murdered, Boyce said.

“Apparently he was hysterical,” Boyce said. “He said a gun was pointed at him.”

The officers found the woman alone in the playground with bruises and cuts. Pieces of her clothing were found strewn near the park. She was hospitalized and interviewed the next day.

DNA evidence from a rape kit administered at the hospital won’t be available for about a week, Boyce said. DNA has been requested from the five suspects. No gun has been recovered.

After the suspects’ capture, at least two of them told investigators they believed the sex was consensual, police said.

Lawyer says girl who claims she was gang raped in Brooklyn is 'laughing' in assault video https://t.co/b6F9Bgd1Ex

The boys also told detectives the woman was having some type of sexual contact with her father when they encountered them, Boyce said.

“We did get that information from two of the persons arrested, from no one else,” he said.

Brown’s attorney, Stanley Leeds, said he believed the evidence against his client was shaky because he was told the woman changed her story while speaking to detectives.

“The conduct suggests there was no rape here,” he said. “The case is weak.”

Brooklyn Assistant District Attorney Lisa Nugent said in court that none of the four suspects was identified by witnesses who viewed lineups and photo arrays. She said prosecutors were investigating “what brought everybody to the park that day.”

Investigators said they did an extensive search for witnesses but came up empty. They said they recoveredvideo from a nearby middle school that showed distant figures entering the park, helping to bolster thewoman’s account.