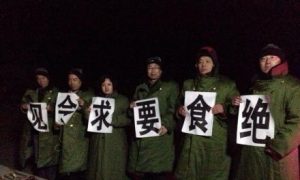 When two practitioners of the spiritual discipline Falun Gong went on trial for their beliefs in southern China’s Guangdong Province on Dec. 20, the presiding judge forbade their attorney from defending them and then expelled him from the court when he objected.

The regime charged Chen Xueqing and Fu Chiying, both retired workers from a local iron and steel group, under Article 300 of China’s legal code, a vaguely worded statute that doesn’t mention Falun Gong but is used to criminalize belief in the practice.

According to New York-based New Tang Dynasty (NTD) Television, the “crime” the two defendants committed was to tell others about how Falun Gong is persecuted in China. The Chinese Communist Party (CCP) censors any information about the regime’s 15-year-long effort to eliminate the practice.

Liu Zhengqing told NTD that he was treated illegally and roughly when he came to the Qujiang District Court in Shaoguan City to defend Fu.

When Liu arrived, he was surrounded by dozens of uniformed police and plainclothes police who wouldn’t let him in unless his bag was examined. Liu indicated that China’s Supreme Court has regulations that that exempt lawyers from security checks at court. Liu was allowed in after some time spent arguing, the report said.

“I requested entering a defense according to the law, [but] four or five police physically carried me out,” Liu told NTD, “Once I was out, a plainclothes [policeman] deliberately hit me very hard.”

The court adjourned the trial soon after Liu was expelled. Liu said such interference with lawyers by the court violates the law.

Liu said that the court only allowed three family members of Chen and Fu to attend the court, while over 200 seats were filled with people arranged by the authorities.

Since Falun Gong was banned and persecuted in 1999, millions of Chinese citizens have been illegally detained for their practice of Falun Gong, with thousands of deaths being confirmed, according to the Falun Dafa Information Center. The actual death toll due to torture and abuse may be several times more than what has been documented, due to the blockade of information in China. In addition to these deaths, researchers believe that tens of thousands of practitioners have been murdered for their organs, which are used in transplantation.

Falun Gong practitioners who are tried have no way to appeal, and the lawyers who choose to defend them take great risks. Many Chinese lawyers don’t even dare to touch cases involving Falun Gong.

In this case, Chen Xueqing didn’t have a lawyer because she couldn’t find one who would defend her. “Lawyers don’t dare to take [the case.] Because it’s useless!” Liu said.

Although defending Falun Gong cases in China is dangerous, many rights lawyers have persisted in helping Falun Gong practitioners.

For instance, four rights lawyers defending four Falun Gong practitioners detained in Jiansanjiang of northern China’s Helongjiang Province were illegally detained and tortured in March. Twenty-four of the lawyers’ ribs were broken, among other injuries they suffered.

In response to their detention, another group of lawyers went to Jiansanjiang to protest on their colleagues’ behalf. Last week, a group of 8 lawyers returned to the same court house to defend Falun Gong practitioners there.