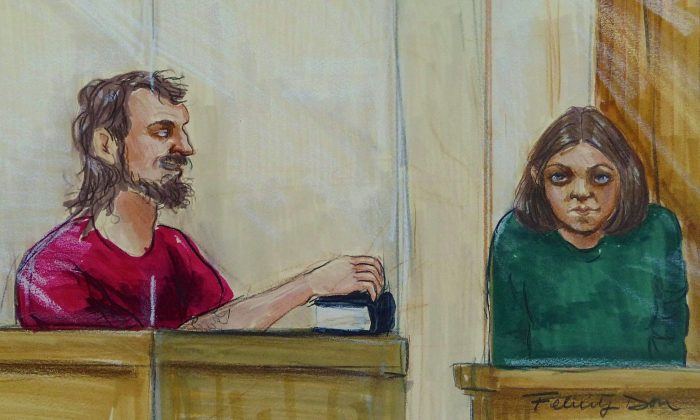 An artist’s sketch shows John Nuttall resting his hand on a Qur’an and his co-accused Amanda Korody in provincial court in Surrey on July 9, 2013. Nutall’s lawyer suggested in court on April 8, 2015, that the key witness in the case—an undercover police officer—encouraged Nutall to build pressure-cooker bombs. (The Canadian Press/Felicity Don)
Canada

VANCOUVER—A key witness in a terrorism trial underway in British Columbia has denied playing a heavy-handed role in encouraging the man accused of building pressure-cooker bombs.

Defence lawyer Marilyn Sandford suggested the undercover police officer directed John Nuttall away from his proposal to assemble handcrafted rockets and toward a quicker, more feasible plan that was “not a fantasy.”

“You knew that he had none of the equipment, the materials or anything to further his rocket plan,” Sandford said April 8.

“I was given the directive to discourage Mr. Nuttall from making homemade explosives and that’s what I did,” replied the officer whose name is covered by a publication ban.

“And to encourage him to actually do something that actually did pose a public safety risk: building a pressure-cooker device,” Sandford said.

“No,” the officer replied.

Nuttall and his wife Amanda Korody have pleaded not guilty to four terrorism-related charges stemming from an alleged plan to attack the provincial legislature on Canada Day two years ago. They were arrested as part of a months-long sting involving more than 240 police officers.

You knew that he had none of the equipment, the materials or anything to further his rocket plan.
— Lawyer Marilyn Sandford

On April 8, a jury watched video taken by a hidden camera showing Nuttall, Korody, and the officer in a pickup truck en route to Kelowna, B.C., on June 16, about two weeks before the alleged attempted bombing.

In the video, Nuttall mused about setting off a couple of pressure-cooker explosives in a Victoria shopping mall to serve as a distraction for the planned rocket attack on the legislature.

He suggested to the undercover officer, who was driving the vehicle, that they place the explosives in a garbage can near the urinals in a men’s washroom to avoid killing women and children, as well as followers of Islam.

At one point, Nuttall suggested firing rockets over the United States border. “From Vancouver to Seattle it’s only 20 miles, right?” he said.

Nuttall said he wanted to cause enough strife and destruction “that the defence secretary of Canada and America will be fired.”

Nuttall and Korody were recent converts to Islam. The jury heard them say in previous videos that they wanted to stage an attack on the western world to avenge what they described as the mistreatment of Islam.