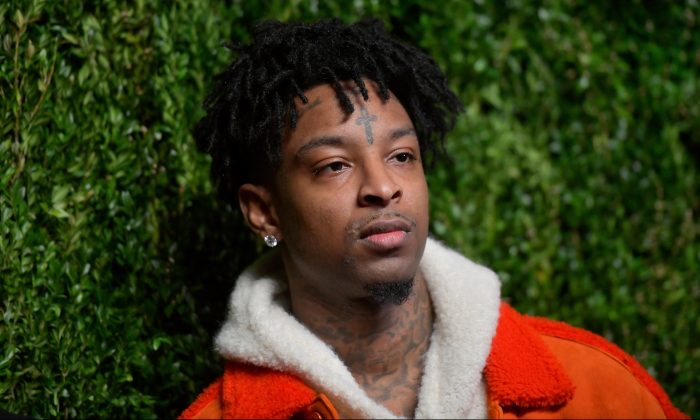 Grammy-nominated rapper 21 Savage was granted bond for release on Feb. 12 after spending more than a week in federal immigration custody, but he wasn’t freed right away, his lawyer said.

The rapper, whose given name is She’yaa Bin Abraham-Joseph, was arrested during a targeted immigration operation early on Feb. 3. Immigration and Customs Enforcement officials said at the time that the British citizen had overstayed his visa and had a felony conviction.

Abraham-Joseph, 26, was granted bond too late Tuesday to be released right away, immigration lawyer Charles Kuck said by phone, adding that he anticipates his client will be released Wednesday.

In an emailed statement, lawyers Kuck, Dina LaPolt, and Alex Spiro said they’ve been speaking with ICE since his arrest to “clarify his actual legal standing, his eligibility for bond, and provide evidence of his extraordinary contributions to his community and society.”

They said they received notification in the previous 24 hours, “in the wake of the Grammy Awards at which he was scheduled to attend and perform,” that he was granted an expedited hearing. The Grammy Awards ceremony was held Sunday.

Abraham-Joseph was nominated for two awards at the Grammys, including record of the year for “Rockstar” alongside Post Malone. His second solo album “I Am I Was,” released in December, debuted at No. 1 on the Billboard 200 albums chart.

After his arrest, ICE said Abraham-Joseph entered the U.S. legally in July 2005, when he was 12, but has remained in the country illegally since his visa expired in July 2006. He was convicted on felony drug charges in October 2014 in Fulton County, Georgia, ICE said. He was placed in deportation proceedings in federal immigration court.

Abraham-Joseph’s lawyers disputed that. They said last week that Abraham-Joseph came to the U.S. when he was 7 and remained in the country until June 2005, when he went to visit the United Kingdom for a month. He returned on a valid visa on July 22, 2005, they said.

“Mr. Abraham-Joseph has been continuously physically present in the United States for almost 20 years, except for a brief visit abroad,” his lawyers said. “Unfortunately, in 2006 Mr. Abraham-Joseph lost his legal status through no fault of his own.”

Federal immigration officials have known Abraham-Joseph’s status since at least 2017, when he applied for a new visa. That application is pending, his attorneys said.

The attorneys also said ICE was incorrect that Abraham-Joseph has a felony conviction on his record. Fulton County prosecutors said they could not provide information on that case because it is sealed.

Abraham-Joseph’s lawyers said Tuesday that he asked them to send a message to his supporters.

″(H)e says that while he wasn’t present at the Grammy Awards, he was there in spirit and is grateful for the support from around the world and is more than ever, ready to be with his loved ones and continue making music that brings people together,” they said.

He added that he “will not forget this ordeal or any of the other fathers, sons, family members, and faceless people, he was locked up with or that remain unjustly incarcerated across the country. And he asks for your hearts and minds to be with them.”

It was a shock for fans when 21 Savage was taken into custody by U.S. immigration agents in Georgia. It was an even bigger shock to learn he had been an immigrant in the first place.

The Grammy-nominated rapper and his music are so deeply associated with Atlanta that the notion he was actually born in England and brought to the U.S. as a child felt downright bizarre.

Scores of surprised tweets came after his Sunday arrest. Memes bloomed that some called cruel under the circumstances, including one of him dressed as a Buckingham Palace guard, along with an old video of him talking in a mock English accent about tea and crumpets. While the United Kingdom is responsible for rap icon Slick Rick, he also grew up in America, and its rappers traditionally have not had much success in America.

“It seems so outlandish that the prototypical Atlanta rapper is not from Atlanta,” said Samuel Hine, a writer and editor at GQ who researched 21 Savage and spent a day with him for a profile in the magazine last year. “I think that’s why so many people were sort of making fun of him, and making memes.”

By all accounts, few knew his real birthplace, and it certainly wasn’t publicly known. His accent gave no indication, and his birth name, She’yaa Bin Abraham-Joseph, could come from any number of birthplaces.

Abraham-Joseph was detained in a targeted operation in the Atlanta area and put in deportation proceedings, U.S. Customs and Immigration Enforcement spokesman Bryan Cox said.

Abraham-Joseph’s attorneys said U.S. immigration officials have known his status at least since 2017, when he applied for a new visa. That application is pending, and his attorneys say he should be freed while it’s pending.

“Mr. Abraham-Joseph has been continuously physically present in the United States for almost 20 years, except for a brief visit abroad,” Kuck Baxter Immigration, the law firm representing Abraham-Joseph, said in a statement Tuesday. “Unfortunately, in 2006 Mr. Abraham-Joseph lost his legal status through no fault of his own.”