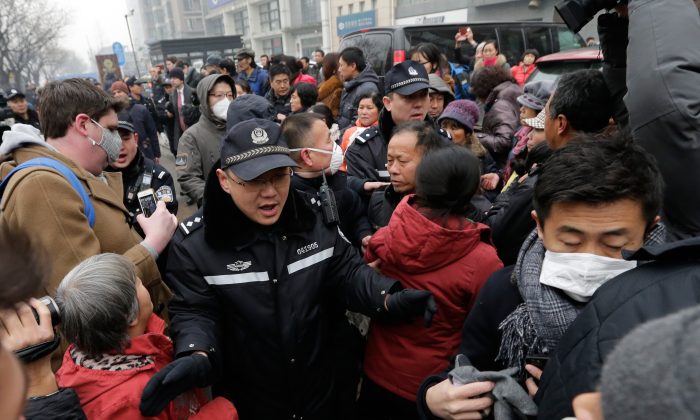 Lawyer on Trial in Beijing as Police Scuffle With Protesters

BEIJING—Police scuffled with protesters and journalists at a Beijing courthouse Monday as a prominent rights lawyer stood trial on charges of provoking trouble and stirring ethnic hatred with online commentary critical of the ruling Communist Party.

Chinese protesters and foreign rights groups said Pu Zhiqiang’s trial at the No. 2 Beijing Intermediate Court amounted to political persecution, and foreign governments including the U.S. called for his release. Pu denied the charges and the trial concluded about midday, with Pu’s lawyer Shang Baojun saying a verdict and sentence would be delivered at a later date.

“Pu Zhiqiang is a lawyer with a conscience,” activist Yang Qiuyu said in a brief interview outside the courthouse while a policeman tried to grab him. “This is why he is now under arrest. We support him, and that means that we are also defending our own rights.”

Pu was active in defending free speech and represented dissident artist Ai Weiwei in a tax evasion case that Ai’s supporters said was politically motivated. He also was instrumental in pushing for the eventual abolishment of the labor camp system, which allowed police to lock up people for up to four years without a trial.

About 50 protesters had gathered at the courthouse along with two dozen journalists and about a dozen Western diplomats, but all of them were denied entrance. In noisy scuffles, police and plainclothes security officers wearing yellow smiley-face stickers pushed journalists and protesters away from the court entrance area. They threw one of the protesters to the ground and took away several others.

At least one foreign journalist also was slammed to the ground, the Foreign Correspondents Club of China said in an open letter of complaint about the rough treatment.

The charges against Pu relate to a number of posts on China’s Twitter-like Sina Weibo that questioned the party’s policies toward the Tibetan and Uighur (pronounced WEE-gur) ethnic minorities in the Tibet and Xinjiang regions, and mocked political figures.

Mo Shaoping, another defense lawyer, said that Pu pleaded not guilty, and that prosecutors had not demonstrated that any of Pu’s postings had provoked troubles or incited ethnic tensions.

“This is really a case of freedom of expression, in which no harm to anyone has been proven,” Mo said in an interview after the trial.

Pu’s lawyers asked for bail, arguing that he was no danger to the public and had medical ailments that needed attention.

The court did not answer phone calls, and prosecutors could not immediately be reached for comment.

Pu was detained shortly after attending a May 2014 meeting to discuss commemorating 25 years since the Tiananmen Square massacre, at a time when authorities were keeping a lid on any public commemorations of the event. Hundreds, possibly thousands, of protesters were killed in the crackdown, and the topic remains taboo in China.

Rights groups have said Pu faces up to eight years in prison.

Dan Biers, a diplomat with the U.S. Embassy in Beijing, told reporters outside the courthouse that the U.S. urges Chinese authorities to release Pu and uphold China’s constitution.

“Lawyers and civil society leaders such as Mr. Pu should not be subject to continued repression but should be allowed to contribute to the building of a prosperous and stable society,” Biers said, reading from a statement.

Patrick Poon, China researcher at Amnesty International, called Pu’s trial an act of political persecution. “He is being punished solely for standing up to the Chinese government in his courageous defense of human rights,” he said.

Amnesty International says there have been “repeated procedural irregularities” in his prosecution, including a prolonged pre-trial detention, denial of adequate medical care and prosecutors refusing to disclose evidence against him to his defense lawyers.