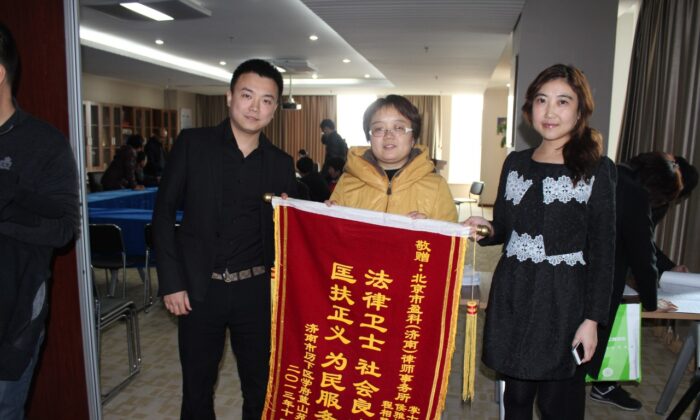 A Chinese lawyer still faces persecution two years after he fled to the UK to avoid prosecution after police summoned him for filing class compensation lawsuits against state-owned developers.

Zhang Shichao, a former lawyer in Jinan, Shandong Province, told the Chinese edition of The Epoch Times that he represented many property owners in class action lawsuits against developers, which were mostly state-owned enterprises.

In September 2018, Jinan Public Security Bureau summoned him and threatened to prosecute.

“The police threatened me saying that they have on file all the lawsuits I represented in the past ten years and that all these lawsuits have brought huge losses to state-owned assets, which may constitute the crime of extorting the Chinese government,” Zhang said.

Zhang joined the Jinan office of Beijing Yingke Law Firm in late 2012. Soon afterwards, he set up a team specializing in class action lawsuits on behalf of homebuyers who had failed to get title documents from developers.

The developers could not produce the title documents because they had altered the plans in order to make more money, Zhang told The Epoch Times.

“The homeowners purchased the houses two or three years before the houses were ready for delivery,” he said. “During the two to three years, the developers altered the original plans in order to make more profits.”

“For example, a developer originally planned to build a 10-story building, but he ended up with a 12 or 15-story building in order to make more money. Due to lack of government supervision or some shady transactions, no one came to check during the construction,” he said.

But upon completion, the housing project must be inspected by the Planning Bureau. When the project was found to be inconsistent with the original plan, the government would refuse to issue title documents to the homeowners, though they had paid for these properties.

“The biggest winner was the developer, and the biggest losers were the buyers, who spent millions of yuan on a unit with no title document, without which you are not the legal owner of the property,” Zhang explained.

Such cases can be found not just in Jinan, but in many major Chinese cities, he said.

Over a period of several years, Zhang’s team filed lawsuits against 10 developers, seven of which were state-owned, seeking tens of millions of yuan in compensation on behalf of homeowners.

One of these developers was Jinan Dongtuo Real Estate Co., Ltd. The firm was majority-owned by Jinan Hi-Tech Holdings Group, which was in turn owned by the state-owned Assets Supervision and Administration Committee of the Jinan High-Tech Industrial Development Zone, a local government organ. Therefore, Dongtuo was effectively a state-owned enterprise.

One of Dongtuo’s real estate project, “Lixiang Jiayuan,” was originally planned to be several 20-story apartment buildings. But the developer built four extra stories in order to make more money.

Because of the inconsistency with the original plan, people who purchased apartments in Lixiang Jiayuan did not get any title documents.

In 2013, Zhang’s team began handling this case. He asked members of the Homeowners’ Committee to knock on residents’ doors and urge them to sue the developer. Out of the over 2,000 homeowners, more than 500 decided to join the lawsuit.

The local government saw it as a “sensitive case” and told Zhang to stop representing the homeowners. The court also refused to handle the case.

The Jinan authorities saw any lawsuits involving more than three people as “collective cases,” which must be approved by the Judicial Bureau before being allowed to go ahead, Zhang told The Epoch Times.

Zhang dismissed the requirement for government approval, arguing that it was not consistent with China’s “Law on Lawyer,” which stipulates that lawyers are free to take up cases and do not need to seek official permission.

In response, the Judicial Bureau threatened to revoke his lawyer’s license.

But Zhang kept up his efforts and advised the homeowners to campaign for their rights by writing joint letters and protesting at government offices.

Under pressure from the authorities, Zhang’s team was forced to stop representing over 300 homeowners. But they eventually succeeded in 2015 in getting the court to agree to handle the case involving the remaining 170 homeowners.

Afterwards, most of these homeowners reached settlements with the developer and got small amounts of compensation. But over 50 persisted in the lawsuit until the end.

The developer paid fines to the government in 2016 and issued title documents to the homeowners.

According to Zhang, by the time the last verdict was announced in 2018, his team had won nearly 10 million yuan (approx. $1.5 million) in compensation for the homeowners.

After Zhang began launching legal challenges to state-owned property developers, he came under constant pressure from the police and other government departments.

“When I handled these cases, Public Security Bureaus in almost every district of Jinan summoned me and threatened me,” he said. “Jinan’s Judicial Bureau also threatened to deny the annual renewal of my lawyer license.”

But far more frightening was threats made against his family members, including his young daughter.

“The most serious incident was of a mafia group who punctured all four tires of my car and left a letter on the windshield saying that they know clearly which grade and class my daughter was attending in her kindergarten,” he said.

“We reported to the police, but they did not take any action, saying there was no way they could find out who did it.”

“That was the most serious threat my family has ever encountered,” said Zhang, who believed the mafia had been hired by a government agency.

In September 2018, the Jinan Public Security Bureau summoned Zhang and told him they were investigating all the cases he had handled over the past 10 years.

According to Zhang, the police said these cases had caused huge losses to state-owned enterprises and that he was suspected of “blackmailing the government.”

Zhang was later fired by the Yingke Law Firm on grounds that he had “refused to follow the Jinan Judicial Bureau’s regulations and advice.” His team was also disbanded.

In 2019, his wife found that all his assets, including three houses, one car, and two back accounts, had been frozen by the authorities.

Local police often harassed Zhang’s family members in China, urging them to persuade him to go back to China.

On June 1, 2020, the Shandong Provincial Public Security Department placed him on a wanted list for suspected “blackmail,” making it impossible for him to return.

Two years of separation from his family has taken a toll. “My third child was born three months after I left. Now he’s nearly two years old, but has never seen his dad.

“Why did this happen? Just because I am a lawyer and handled some cases the authorities thought should not have been handled.”

He hopes democracy and the rule of law will become a reality in China in the not-too-distant future. “Only when that happens will Chinese lawyers be able to freely practice their profession,” he told The Epoch Times.

Olivia Li and Grace Song of the Chinese edition of The Epoch Times contributed to this report.