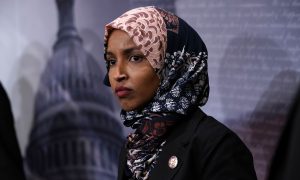 Ahead of a potential defamation lawsuit, lawyers for Covington Catholic High School student Nick Sandmann sent letters on Feb. 1 to more than 50 people and companies, including The Washington Post, The New York Times, CNN, The Guardian, and NPR, as well as celebrities such as Bill Maher, Kathy Griffin, and Jim Carrey. Sen. Elizabeth Warren (D-Mass.) is on the list too.

The letters urge the recipients to preserve records, including electronic ones, related to the incident, where a number of media and people with substantial social-media followings spread claims about Sandmann and his classmates that turned out to be false or misleading.

Following the Jan. 18 March for Life in Washington, students of the Kentucky religious private school were waiting for their bus near the Lincoln Memorial, when they were approached by several Native American activists.

The encounter was extensively covered by media using short video clips that made it appear that the students were chanting and cheering in mockery at one of the Native American activists, Nathan Phillips, 64.

“There was a rush by the media to believe what it wanted to believe versus what actually happened,” Todd McMurtry, the lawyer who sent the letters, told Cincinnati Enquirer.

However, as longer videos from the scene documented, the students had started cheering and chanting their school chant to drown out offensive remarks being made by a small group of Black Hebrew Israelites nearby. Some of the students were wearing hats with President Donald Trump’s campaign slogans, such as “Make America Great Again.”

While Phillips told media outlets that the students had harassed him, the longer videos showed it was he who approached them, inserted himself into their crowd, and, for several minutes, banged his drum within inches of the face of Sandmann, who responded by standing silently with a smile.

Many media and social-media users have retracted and corrected their initial articles and posts about the incident as they reviewed additional information. But the initial coverage resulted in threats against and harassment of the students, their families, their school, and others.

“For the mob to just go tear apart a 16-year-old boy is inexcusable,” he said. “He’ll never be able to get away from this.”

The Enquirer published the list of the letters’ 54 addressees on Feb. 1.

Not everyone on the list will necessarily be sued, said McMurtry, who’s with the Kentucky-based Hemmer DeFrank Wessels firm. But he and L. Lin Wood, an aggressive libel lawyer who also is representing the Sandmann family, “concluded we have a good-faith basis to sue,” McMurtry said.

“We want to change the conversation. We don’t want this to happen again,” he said. “We want to teach people a lesson.”

The lawyers will demand retractions and apologies, too.

“They know they crossed the line,” McMurtry said. “Do they want 12 people in Kentucky to decide their fate? I don’t think so.”

McMurtry specified that an example of a false report would be claiming that it was Sandmann who got into the face of Phillips.

Those on the list can be expected to “raise legal defenses and challenges that we’ll have to overcome,” he said. “But that’s the way it goes.”

He expected to next begin conversations with lawyers of the people and organizations on the list, and possibly filing lawsuits.

Kentucky libel laws are relatively broad when the damaged party is a private citizen, according to lawyer Robert Barnes, who also represents some of the Covington families. Mere “unflattering impression given and putting a person’s reputation in a false light” out of negligence is enough to sue, he said.