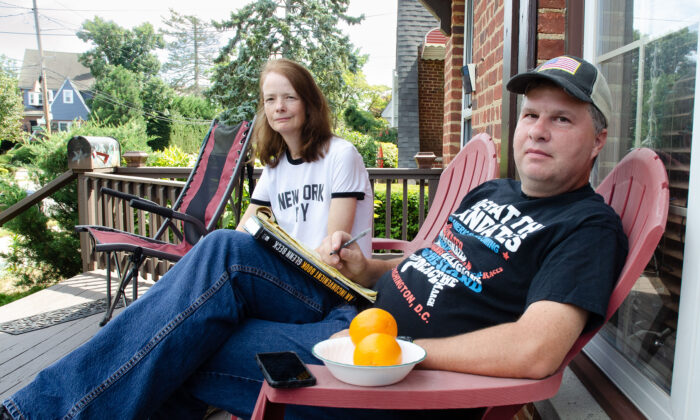 NEW YORK—Nearly a year ago the City of New York required all its employees to be vaccinated against COVID-19. A few religious and medical exemptions and accommodations were granted, but for the most part, anyone who filed for either was denied.

Those who lodged requests included police officers, sanitation workers, schoolteachers—just about every position citywide. Those who were denied and still refused to take the jab were put on unpaid leave and many were ultimately terminated.

But some fought back.

As reported by The Epoch Times, one such combatant is Jim Hogue, a high school history teacher in Forest Hills, Queens.

As reported by The Epoch Times, last year teachers were not able to request religious accommodation on the city’s Self-Service Leave Application System (SOLAS).

A special education teacher on the middle school level in Brooklyn who spoke to The Epoch Times on the condition of anonymity said she had uploaded all her information, including a statement from her pastor, but when she got to the final step of “submit,” a message popped up saying she was “non-compliant to the mandate,” and could not apply for this exemption.

In mid-August of 2022, SOLAS was modified with one enormous change: In bold, red letters it said, “Please be advised at this time you cannot apply for a COVID vaccine-related exemption/accommodation for 2022–2023 school year.”

However, a week after his story was posted on The Epoch Times’ website, SOLAS was modified again and he was able to put in the request, which has not yet been decided upon.

In an Aug. 20 email to The Epoch Times he wrote, “[The article] may have caused a policy change to occur in NYC DOE. This week, they were at least allowing individuals to apply for religious exemptions.”

Hogue is represented by Brooklyn-based attorney, Jimmy Wagner, who in an Aug. 20 phone call to The Epoch Times expressed the same sentiment—that the article may have been the reason for the modification.

The new school year starts on Sept. 8 and Hogue does not know if he’ll be on the job or not that day.

“I was looking for every, single document related to COVID that was in the possession of the New York City Department of Health,” Wagner told The Epoch Times.

He was specifically looking for information that came from the White House and from Mayor Eric Adams’ office.

“I wanted to see where they were getting this idea that it was necessary for every employee in New York City to be vaccinated,” Wagner said.

He went through several denials and appeals before they reached an agreement where he was granted access to documents relating to the United Federation of Teachers (UFT) and any documents that referenced the virus and the vaccinations.

“The problem was they didn’t provide that information,” Wagner said.

He claims the City of New York kept giving him dates they’d provide these documents and the dates came and went with no documents.

“It was clear that they never had any intentions of giving me anything,” Wagner said.

It was then he asked assistance from a fellow attorney who was able to help him obtain some of what he was looking for.

An Aug.25, 2021, internal memorandum from the department of health and mental hygiene stated a total of 9092 “serious adverse event reports” for the vaccinations.

In addition to this memo, Wagner acquired a Sept. 21, 2021, letter from Dave Chokshi, the health commissioner, to Martin Scheinman, the arbitrator hired to mediate the lawsuits between the city and the terminated teachers.

Wagner feels Chokshi was “clearly guiding” the arbitrator “on how to discuss and rule on people requesting a religious accommodation.”

One common argument from Catholics is that tissue from aborted fetuses is used in the development and production of the vaccines and therefore they cannot condone them.

The letter specifically states how Scheinman can counteract that argument by saying the vaccines use “fetal cell lines” which are “not the same as fetal tissue,” and “the Catholic Church has issued a clear statement that Roman Catholics can in good faith receive COVID-19 vaccines that use fetal cell lines in development.”

“This letter is sent to the arbitrator in the middle of the arbitration services,” Wagner said. “The City of New York is clearly a respondent in that. The arbitrator is just like a judge—they have a duty to be impartial.”

The third document Wagner received is an eight-page email chain that started with Nellie Afshar, the chief of staff at the health department, and was sent to Chokshi.

The subject was “Urgent Need for Help—UFT Accommodation Process.” Other than a few other names in the chain, the entire eight pages were redacted. Wagner believes he’ll eventually see the unredacted emails.

“I’m anticipating finding some type of collusion between the city, the UFT, and the arbitrator,” he said.

Wagner has shared these documents with other attorneys who have similar lawsuits pending.

Wagner’s original FOIA request was for documents pertaining to COVID and the vaccinations within the timespan of June 2021 to November 2021.

He was provided with one memo and he finds this a little fishy.

“I’m still a little baffled how the commissioner only has one memo in that entire time giving him a report update of COVID-19,” Wagner said.

As reported by The Epoch Times, in addition to Hogue, Wagner represents schoolteacher Rachel Maniscalco in one of her two pending lawsuits against the DOE and the City of New York; and terminated NYPD officer Marjel Kola in his lawsuit against the city.

Recently the Center for Disease Control (CDC) greatly modified its position on COVID.

“The CDC has done a complete 180,” said Wagner, citing changes in regulations of distancing and mask-wearing, as well as acceptance of natural immunity.

“This is something that we’ve been trying to promote for the last 24 months and we’ve been told that we’re crazy,” he said.

Wagner won’t be surprised if Jim Hogue and his unvaccinated colleagues wind up in a classroom on the first day of school.

“The DOE is a monstrosity of an organization and I wouldn’t be surprised that [in] the midnight hour they turn around and say, ‘All right guys, come back in,'” he said.