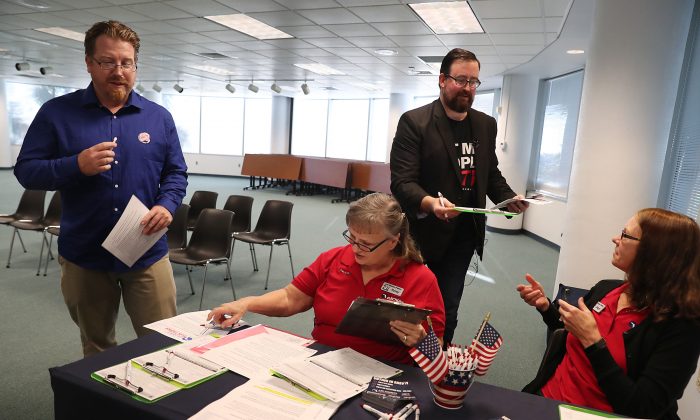 Lance Wissinger (L) and Neil Volz, both with felony records, hand in their voter registration forms at the Lee Country Supervisor of Elections office in Fort Myers, Fla., on Jan. 8, 2019. (Joe Raedle/Getty Images)
US News

After Florida Gov. Ron DeSantis signed a measure into law that requires felons to pay any outstanding court-ordered fines or restitution that were part of their sentence before regaining their right to vote, left-leaning groups promptly sued to block the new legislation, claiming it undermines a popular amendment to the state’s constitution.

Florida is viewed as a must-win state by both parties in next year’s presidential election, and the new legislation, which clarifies how the amendment is enforced, could affect voter turnout.

The Florida House of Representatives approved the legislation 67–42 on May 3 after the Senate approved it 22–17 the day before.

Amendment 4 received 64.55 percent support out of nearly 8 million votes cast on Nov. 6, 2018. A supermajority of 60 percent was required for passage.

The amendment restored the voting rights of Floridians with felony convictions after they completed all terms of their sentence including parole or probation. But those convicted of murder or felony-level sexual offenses continue to be permanently barred from voting. Such individuals could still have their voting rights restored on a case-by-case basis by the governor and his cabinet.

As many as 1.5 million felons are thought to reside in the Sunshine State.

Neil Volz, political director of the Florida Rights Restoration Coalition, told The Washington Post around 800,000 felons have no outstanding fines or fees to pay and should be able to register to vote.

The Florida Rights Restoration Coalition, which spearheaded the Amendment 4 campaign, is raising money to cover fines for felons unable to pay them.

“Our initial goal is $3 million,” said Desmond Meade, executive director of the group. “We know a lot of people have financial hardships, and we want to rally around them and help them take this next step.”

But few felons have apparently taken advantage of their new rights. About 2,000 felons registered to vote in the three months after Amendment 4 took effect at the beginning of the year, according to the Orlando Sentinel.

The constitutional amendment “says, if you read it, you have to complete your sentence,” DeSantis said, days after lawmakers approved the measure.

“And I think most people understand you can be sentenced to jail, probation, restoration if you harm someone. You can be sentenced with a fine. People that bilk people out of money, sometimes that is an appropriate sentence. That’s what the constitutional provision said. I think the Legislature just implemented that as it’s written.”

“Governor DeSantis is not only ignoring the will of Floridians, he’s instituting a racist, modern-day poll tax,” said Tory Gavito, president of Way to Win, a Walnut, California-based nonprofit.

“It’s all part of his and Republicans’ broader strategy to keep people of color and others who have been disproportionately targeted by our broken criminal justice system from exercising their right to vote.”

The 24th Amendment to the U.S. Constitution, ratified by the states in 1964, forbids both Congress and the states from conditioning the right to vote in federal elections on payment of a poll tax or other types of tax.

“Over a million Floridians were supposed to reclaim their place in the democratic process, but some politicians clearly feel threatened by greater voter participation,” she said.

“They cannot legally affix a price tag to someone’s right to vote.”