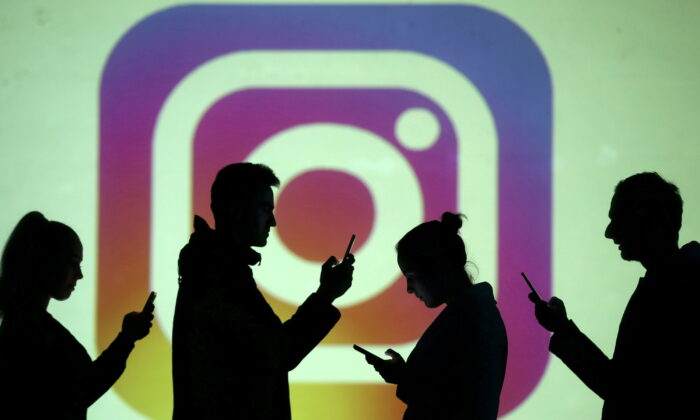 Silhouettes of mobile users are seen next to a screen projection of the Instagram logo, on March 28, 2018. (Dado Ruvic/Reuters)
Social Issues

Some addictive products come from screens, not syringes, according to new lawsuits against Instagram.

Lawsuits by eight former teen Instagram users including Laura Ashman, Chesapeake Dowdy, and Brianna Perez demand damages based on Instagram’s alleged negligence and concealment of safety risks. The named three say they were 13 or younger when they began using Instagram.

The Motley Rice law firm has petitioned California’s courts to coordinate these lawsuits because they have similar claims.

Instagram’s addictive effects on teens resemble hard drug addiction, according to the lawsuit filed in the Superior Court of California in and for the County of San Mateo.

Uncontrollable cravings, changed sleep schedules, self-harm, loss of appetite, anxiety, and suicide all often spring from use of the social media app, according to the lawsuits.

“None of this is an accident. This is a pattern that Instagram understands because they’ve studied it. And it’s also a pattern that they’ve chosen to ignore because it was in their self-interest to do so,” said Previn Warren, a partner with Motley Rice.

All started using the app at 12 years old or younger. From there, their stories spiraled into catastrophe, the lawsuits state.

Ashman found herself addicted to the app, her lawsuit claimed. She spent up to 10 hours daily scrolling through posts on Instagram. Because of her time in the app, she skipped school, developed eating disorders, self-harmed, and attempted suicide on three occasions, her lawsuit states.

Her grades plummeted, and she fought with her family when they tried to take her phone away, her lawsuit said.

“To this day, Laura wears the scars of her self-harm, up and down her arms and legs. During her freshman year, Laura attempted to take her own life, the first of three such attempts,” the lawsuit reads.

“Zuckerberg’s motto is to “move fast and break things.” As shown below, he and his companies succeeded in breaking this young woman’s childhood,” Perez’s lawsuit reads.

Meta knew Instagram had these effects on teenagers, according to internal documents, the lawsuit alleges.

“Defendants concealed the fact that, according to their internal studies, Instagram ‘make[s] body image issues worse for one in three teen girls’ and that ‘mental health outcomes related to this can be severe.’ Furthermore, Defendants have long understood the power of their products to manipulate the mental health of their users,” Ashland’s lawsuit reads.

The lawsuits provide dozens of pages showing how Instagram designed a website that made addiction profitable, understood its effects, and marketed it to teenagers. This research includes whistleblower-released documents from Meta employee Frances Haugen and scientific research.

Instagram’s harmful effects start in the brain, according to the lawsuits. The teenage brain doesn’t have the same level of impulse control, emotional maturity, resiliency, and decision-making capacity as adults. When hormones like dopamine make teens feel happy, they often don’t stop and evaluate.

“Several other product features employed by Instagram collectively lead to negative mental health outcomes for teenagers, in part because they are designed to addict that demographic to the product and in part because they prey on teenagers’ desire for validation and need for social comparison,” the lawsuits read.

Instagram’s notifications, the way its messaging system works, the way its feed disappears soon after leaving the app, and the design of its feed, are designed to pull users back into the app, the lawsuits allege.

All these features pull teens back into the app and encourage them to scroll down their feed for as long as possible, the lawsuits stated.

“Addiction is driven, in part, by the algorithms that power Instagram, which are designed to induce compulsive and continuous scrolling for hours on end,” the lawsuits read.

Instagram’s designers knew these things—then designed a website that used these tactics to make money, the lawsuits argue.

He noted that this claim comes from Instagram’s own research.

“Infinite scroll contributes to Instagram’s addictiveness by supplying users with an endless stream of stimuli that may trigger a dopamine hit, keeping them using the product and further strengthening their addiction,” the lawsuits state.

“The goal is to prompt further ‘engagement,’ meaning more views of advertisements and more revenue for Defendants,” the lawsuits read.

Instagram’s focus on lifestyle and image makes it worse than other addictive apps, the lawsuits state.

“Facebook’s own research says Instagram is actually distinctly worse than, say, TikTok or Snapchat or Reddit, because TikTok is about doing fun things with your friends. Snapchat is about faces and augmented reality. Reddit is vaguely about ideas. But Instagram is about bodies and about comparing lifestyles,” whistleblower Frances Haugen told Congress in October 2021.

Instagram’s image-focused app distorts teens’ perception of their bodies, Warren said. When teenagers obsessively use filters, it can damage their ability to see themselves as they are.

“I don’t even know what I look like anymore,” he recalled one Instagram-addicted young woman telling him.

This mental damage leads to body dysphoria, where teenagers imagine themselves to be overweight or ugly, Warren said. In some cases, he added, it can lead to gender dysphoria.

These first lawsuits against Instagram likely will be the beginning of a series of mass tort lawsuits, said Warren.

A mass tort allows multiple people to sue a company for severe damages on similar grounds. However, each lawsuit of a mass tort gets filed individually.

“At some point, the court system will coordinate those and allow for an efficient way forward,” Warren said.

He added that, at the present, he can’t say how high judgments to plaintiffs could go, if they win.

In employment-related cases, people can sometimes receive over $100,000 for emotional distress.

Warren compared the case to lawsuits against the tobacco industry for harmful products.

“The courts shouldn’t treat this product any differently than they would treat tobacco, vaping, opioids, or whatever,” he said. “It is a dangerous product that has a chemical impact on the brains of young people, and it shouldn’t be relevant that it happens to take place through a smartphone.”

The Epoch Times reached out to Meta, but received no response.