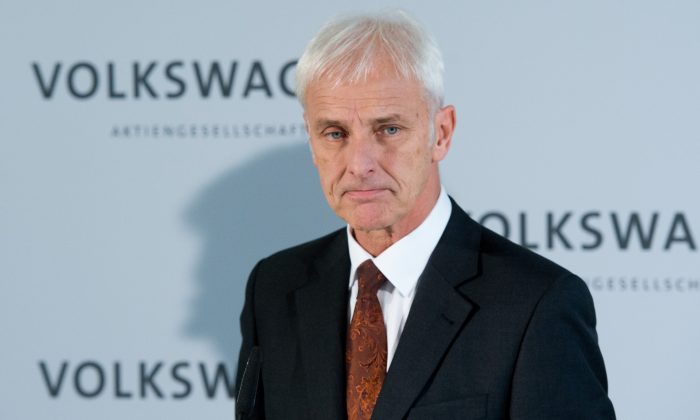 VW CEO Matthias Mueller delivers a statement after a meeting of the board of directors of German car manufacturer VW in Wolfsburg, northern Germany, on Nov. 20, 2015. (Julian Stratenschulte/AFP/Getty Images)
Business & Economy

Lawsuits Against Volkswagen to Be Consolidated in California

NEW ORLEANS—A judicial panel on Tuesday decided to consolidate hundreds of lawsuits against Volkswagen over its emissions cheating scandal in California, a focal point of the carmaker’s troubles.

The Judicial Panel on Multidistrict Litigation gave U.S. District Judge Charles R. Breyer in San Francisco oversight of more than 450 suits filed against the carmaker across the nation.

The panel met last week in New Orleans to hear from numerous lawyers who were seeking to get the suits consolidated in a particular federal district. Volkswagen and the federal government asked the panel to centralize the suits in Michigan.

Instead, the panel said it makes more sense to turn California into the center of the legal wrangling, in part because there are so many VW owners and dealers there.

Lawyers for VW and the Justice Department did not immediately return messages seeking comment.

German Investigation of VW Expands to Include Tax Evasion

VW has admitted that 482,000 2-liter diesel vehicles in the U.S. contained software that turned pollution controls on during government tests and off during real-world driving. The government says another 85,000 6-cylinder diesels also had cheating software.

VW says the software in the 6-cylinder diesels is different and is legal in Europe, but it has halted sales of those vehicles in the U.S. while it explains its case to the government.

In Tuesday’s ruling, the panel said no party in the litigation opposed centralization.

In choosing California, the panel said the state is where the “most affected vehicles and dealers” are located. The ruling also noted that the California Air Resources Board “played an important initial role in investigating and, ultimately, revealing VW’s use of the defeat devices.”

The panel also noted that the first federal suit against VW was filed in California; altogether, 101 cases have been filed there.

The panel said Breyer is “thoroughly familiar with the nuances of complex, multidistrict litigation,” having handled nine other such cases, including some involving international defendants.

“We are confident that Judge Breyer will steer this controversy on a prudent and expeditious course,” the panel ruled.

The judicial panel’s job is to determine whether lawsuits in different federal districts should be amassed under one court to prevent duplication and inconsistent rulings and to make it easier for lawyers.

The panel holds hearings in different locations around the nation. It happened to be in New Orleans last week when the VW cases came up.