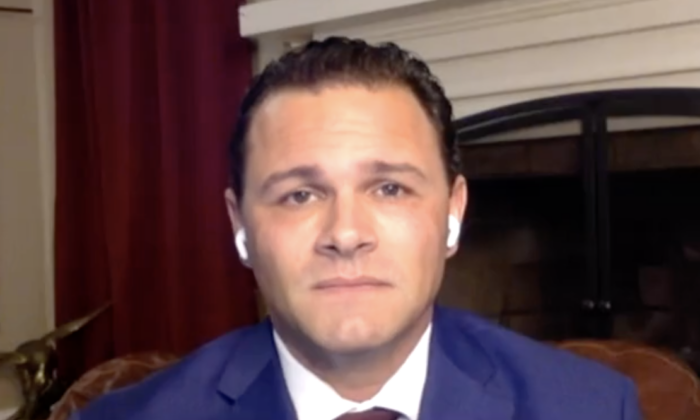 Candidate for Congress in Virginia’s 2nd district, Tommy Altman, in an interview with NTD Capitol Report on May 24, 2022. (NTD)
Education & Family News

Tommy Altman, an Air Force veteran running for a seat in the U.S. House of Representatives for Virginia’s 2nd district, recently filed a lawsuit over a sexually explicit book that has made its way into some Virginia public schools.

Altman believes that parents have the right to decide if their child views a book that is sexually explicit and that schools should be required to get parental consent before giving such books to students.

“So, I’m suing the publisher, the authors, because it’s obscene. And so, with that comes a restraining order against the local Barnes and Noble not to distribute,” Altman told NTD Capitol Report during a recent interview. “And the reason we’re doing this is because I believe that parents have a right to get parental consent if their child is going to use sexually explicit materials.”

Altman is referring to the book “Gender Queer” by Maia Kobabe.

Kobabe told a local radio station that the title of the book likely makes parents uncomfortable but that banning it tells LGBTQI individuals that they are not welcome in their communities.

“I really think that they are about a wave of viral bans that are seeking to control information about our identities, and trans identities specifically, and limit the access of young people to this information, and my book is just getting caught up in this wave,” Kobabe told KBIA, a Missouri public radio service, during a recent interview.

However,  Altman refutes the claim that his suit is in violation of the First Amendment. He said his effort to have the book taken out of schools has to do with the right of parents to decide what sexual content their child has access to.

A national poll found that 72 percent of voters who have an opinion on the issue don’t believe that schools should teach about sexual identity and sexual behavior with elementary-age children. Specifically, 42 percent believe that such teaching is inappropriate in a school setting, and 30 percent believe it is dangerous and could lead to children being groomed for sexual encounters at a young age.

The McLaughlin and Associates poll, which was commissioned by Summit Ministries of Manitou Springs, Colorado, was conducted online with 1,000 likely general election voters nationwide from April 22 through April 26.

Altman, a parent of two, also said some of the content in “Gender Queer” is too explicit to show on the news.

“Most news agencies actually won’t even show the images or read the actual word allowed because it violates the law. So, it’s a huge problem that this is in our public schools that are available to minors without any kind of parental consent,” Altman said.

“And that’s all we’re asking for, you know, people talk about, we’re violating first amendment rights. We’re not violating personal rights. Nowhere in the First Amendment is a guarantee [to] the right to distribute pornography to minors.”

In an emailed statement to The Epoch Times, Barnes & Noble public relations wrote: “As booksellers, we carry thousands of books whose subject matter some may find offensive. We live in a diverse society, and that diversity of opinion is reflected in the books we carry on our shelves that cater to the wide range of interests of our customers.”

“We ask that our customers respect our responsibility to offer this breadth of reading materials, and respect also that, while they chose not to purchase many of these themselves, they may be of interest to others,” the statement continued.

The Epoch Times has reached out to the publisher for comment.

Matthew Vadum and Terri Wu contributed to this report.